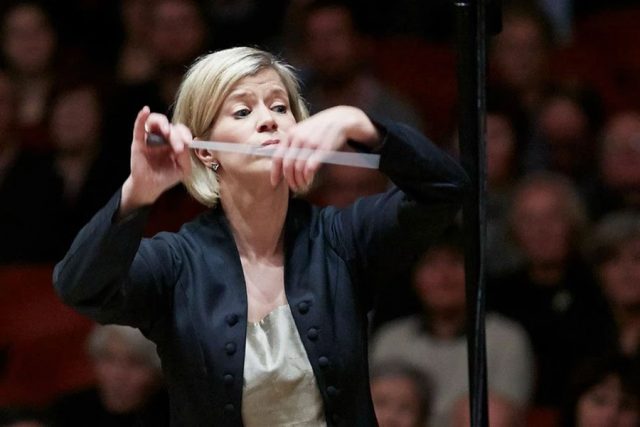 Three composers with uncomfortable ties to Russia and the Soviet Union came together Friday in the last guest-conducted concert of the Charlotte Symphony’s classical season.

Vladivostok-born Victoria Borisova-Ollas moved away from her homeland as a teenager in the 1980s and has spent the bulk of her life in Sweden. Dmitri Shostakovich faced condemnation and censorship through much of his career in the USSR. And Jean Sibelius spent the first 50 years of his life under Russian sway: The armies of Tsar Alexander I took control of Finland in 1809, making it an autonomous Grand Duchy of the Russian Empire until World War I.

No wonder, then, that the current invasion of Ukraine hung over the concert. Even soloist Calin Ovidiu Lupanu, who played Shostakovich’s long-suppressed Violin Concerto No. 1, prefaced his encore with the simple phrase “For peace.” He then gave us the sarabande from Bach’s Partita No. 2 for solo violin, soul-soothing music at its deepest.

Karen Kamensek, presumably the sixth music director candidate to come through this season, seemed most connected to Borisova-Ollas’ “Angelus.” The two women have known each other for years, and this U.S. premiere of the 2008 tone poem brought out all the beauty and diversity in its 22 minutes.

Kamensek told us the composer had walked around Munich, absorbing the sounds of that metropolis, and you could hear those elements in the steady pulse of her piece: church bells, birdsong, traffic, hurried conversations among scurrying people, perhaps even the rain and thunder of a quick storm. Though the music never varied much in tempo, changes in dynamics and mood kept it interesting.

Shostakovich’s concerto caught fire intermittently, usually when Lupanu played. It lasts about 36 minutes, longer than any mainstream violin concerto except Beethoven’s and Brahms’, and it needs the most incisive playing to make it come to life. Lupanu provided that, especially in the ferocious passages of the scherzo and the savage humor of the final burlesque.

The orchestra seldom did, except in a few waves of passion during the wilder sections. Most of the time it jogged along correctly, in a manner nearly free of tension and despair. Lupanu’s few minutes of Bach contained more heart than most of the orchestral passages of the concerto put together.

Sibelius’ Symphony No. 2, a self-described “confession of the soul” that put him on the world’s musical map in 1902, got somewhat more energetic treatment after the intermission. Yet even here, we heard a rendition where all the notes were in place without special insight.

Kamensek carefully observed dynamic markings, took reasonable tempos and occasionally gave us flashes of high drama. But the dark mystery, the sense of danger, the sudden rush of joy at the glorious start of the fourth movement – these were not to be found, and chills never ran up the spine.

P.S. Anyone still describing Charlotte with the embarrassing adjective “world-class” might consider this: Kamensek assuaged anxieties about “Angelus” by saying, “Don’t be afraid because it’s modern. It’s very cinematic.” No concertgoers in any world-class city on Earth would need to hear that before a premiere.

The concert repeats tonight at 7:30 p.m. in Knight Theater. You can get details here.