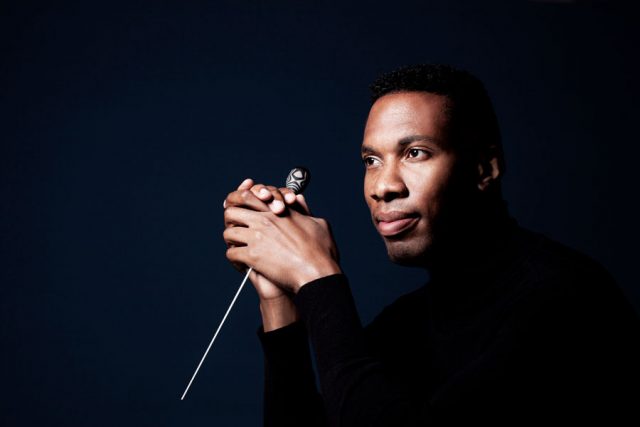 Twelve years ago, Christopher Warren-Green auditioned for the job of music director with the Charlotte Symphony Orchestra, guest-conducting a concert capped by a vivid rendition of Rimsky-Korsakov’s “Scheherazade.” The wheel comes round again this year, as six guest conductors get a chance to show what they can do with the CSO before Warren-Green leaves in 2022.

None of these pieces exploits the full tonal range of a classical orchestra or plumbs many emotional depths. Brahms’ Symphony No. 3 would have done both, but management replaced it with the serenade to accommodate a reduced orchestra and allow additional spacing for wind and brass players, who can’t be masked. (The concert repeats Saturday; you’ll find information here.)

Yet despite the confines of the programming, Cox conducted with intelligence, sensitivity, precision and energy. He has set the bar high for the five young guest conductors who’ll follow.

Youth ruled the evening. Neither Cox nor solo violinist Benjamin Beilman has reached 35; Brahms finished the serenade at 26; Mozart composed this last authenticated violin concerto at 19. Wagner was 57 when he wrote the idyll as a birthday present for his second wife, but he was probably feeling his oats: He’d married Cosima just a few months earlier, legitimizing their two children.

The “Siegfried Idyll” can easily seem overlong, not music to wake up to – as Wagner meant it to be for Cosima – but a lazy lullaby that floats repetitiously along. Cox gave it no chance to sag, conducting at an unhurried but steady flow and emphasizing the dramatic links to the “Ring” cycle. (Wagner was polishing the third act of the opera “Siegfried” at the time.)

Beilman, who played the Beethoven concerto here in 2017, paired smoothly with Cox in Mozart. Together, they attacked the vigorous parts with swift sureness, especially in the mock-militant “Turkish” section of the finale. When left alone in the solos, Beilman often produced a sweetly intimate tone that anticipated the sentiments of the Romantic era. His 19th-century-style cadenza underlined that forward-looking feeling; I’m guessing it came from Joseph Joachim, Brahms’ favorite violinist.

Cox finally got a chance to imbue a score with a bit of mystery in the serenade. Brahms originally wrote that piece for a full orchestra, then re-scored it 16 years later for a chamber orchestra. He omitted violins in the revision, so the string lineup – eight violas, five cellos, three double-basses – creates a darker sound even in joyful moments.

Only the centerpiece of the five sections, an adagio non troppo Clara Schumann admired, can take much weight; there the musicians played with gravity tempered by a smile. They bounced genially through the other four movements, and Cox capped the piece with a bounding allegro that suggested hunters tally-hoing across spring fields. One can only guess what he could do with a broader musical palette, but I’d like to find out. 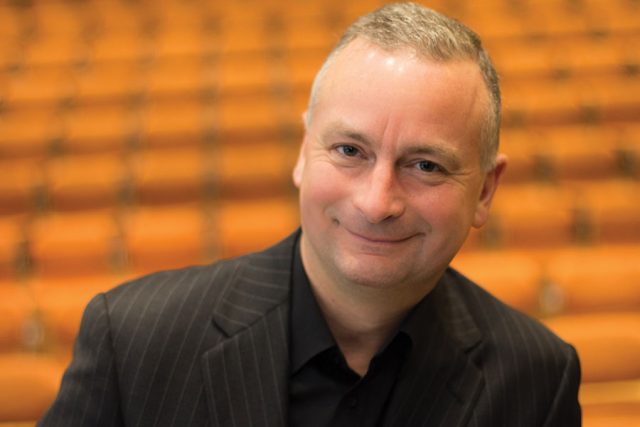 The Charlotte Symphony has announced that David Fisk will be its next President and Chief Executive Officer starting August 31, 2020.

Mr. Fisk comes to Charlotte from Richmond, VA where he has served as Executive Director of the Richmond Symphony since 2002. Previously, he was Chief Executive of the Ulster Orchestra in Belfast, the national symphony of Northern Ireland. Before that he led a chamber orchestra in London, a sculpture park in Yorkshire, and an international arts festival in Manchester, England. Along with extensive experience in performing arts management, he brings a passion for creating community partnerships and access to music for all.

David Fisk is originally from England and became a U.S. citizen in 2014. He began his musical life at age 8 in the choir at St. Paul’s Cathedral in London. He holds a degree in music from Manchester University and a postgraduate diploma in piano accompaniment from the Royal Northern College of Music. David has continued to give public concerts frequently as a collaborative pianist and helps out in church services around town as a substitute organist. 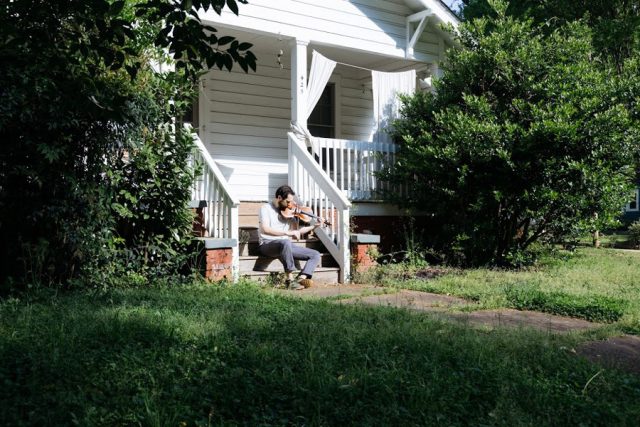 On April 17 at 3 p.m., members of the Charlotte Symphony Orchestra (CSO) played Beethoven’s Pastoral Symphony from their homes. Without seeing or hearing one another, each musician played their part, held space for their colleagues, and trusted that the wholeness of the score connected them. The musicians decided to perform this unique performance as a gesture of gratitude for music, one another, the CSO, and their communities.

Watch videos of the musicians’ performances at asymphonyapart.com and on the Charlotte Symphony Facebook page.

POSTED Monday, April 19, 2010 — As a result of the ash cloud from the recent volcano eruption in Iceland that has mandated closures of virtually all European airports and cancellations of flights, the Charlotte Symphony (CSO) announced today that Christof Perick is unable to travel to Charlotte to rehearse and conduct his final concerts as Music Director on April 22, 23 and 24.

END_OF_DOCUMENT_TOKEN_TO_BE_REPLACED

The Charlotte Symphony Orchestra announced today that it has received pledges of $1 million contributions from two of the region’s most generous arts philanthropists: Jane & Hugh McColl, and the C.D. Spangler Foundation.

END_OF_DOCUMENT_TOKEN_TO_BE_REPLACED

This week Jennifer Foster will host two season preview programs – for the Charlotte Symphony and the Winston-Salem Symphony. She’ll take a look at what’s coming up on their classics series and will excerpt some of the planned concert works. She’ll also play recordings by some of the guest artists such as guitarist Jason Vieux and cellist Lynn Harrell and talk to WSS music director Robert Moody.
The Charlotte Symphony Season Preview airs Thursday 9/10, 10 a.m., and the Winston-Salem Symphony Season Preview airs Friday 9/10, 10 a.m.

END_OF_DOCUMENT_TOKEN_TO_BE_REPLACED

The Charlotte Symphony Orchestra hosts a rally in Uptown Charlotte at Trade and Tryon Streets tomorrow, Thursday, August 27, at noon, and WDAV will take you there.