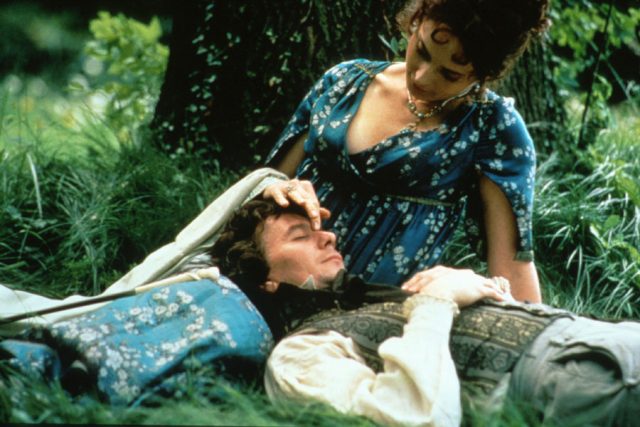 December 30, 2020WDAV BlogNews & Features, UncategorizedB250, Lawrence ToppmanComments Off on Looking for love in all the wrong places

Remember the 1994 movie “Immortal Beloved”? Its poster showed an improbably dashing Beethoven sitting in a chair, with the arms of an otherwise unseen female wrapped affectionately around him.

That fanciful biography took its title from a letter Beethoven wrote in July 1812 to a woman who has never been identified. The letter began “My angel, my all, my self” and ended “The gods must send what must and what should be for us – Your faithful Ludwig.”

The two likeliest candidates seem to be Antonie Brentano, an affectionate married woman to whom he was drawn, or Bettina Brentano, her sister-in-law by marriage and a younger muse to many men, including Goethe. (She introduced Beethoven to him at the composer’s request; he’d hoped to coax the old man into writing an opera libretto, but that came to nothing.)

Because Beethoven had a profound respect for wedlock, and because Bettina soon became a wife after he met her, he probably didn’t sleep with either. His lifelong bad fortune consistently drew him to women who were married, too young, too flighty, uninterested in him physically or too highly placed socially to accept him as a suitor.

In fact, lasting love of all kinds eluded him after the death of his mother when he was 16. His father beat, humiliated and exploited him. His brothers, neither of whom had any interest in his work except when hawking it to music publishers, went their own ways. He considered one sister-in-law no better than a prostitute and fought her in the courts for custody of her son, Karl. That four-year struggle ended with him gaining guardianship over the 14-year-old in 1820.

As his father had done with him, Beethoven attempted to squeeze music out of his nephew. Karl, uninspired as both a pianist and a composer, reasonably tried to fight free of his uncle’s grasp. He set his mother and uncle against each other, led an unambitious academic life, unsuccessfully attempted suicide in 1826, entered military service the following year and never saw his uncle again.

As this would-be-paternal relationship fell apart, Beethoven stopped seeking loving connections with family members and the opposite sex. Instead, he poured his feelings into music.

When the Missa Solemnis premiered in 1824, he dedicated it to Archduke Rudolf of Austria, his main patron as well as a former pupil and friend. He inscribed Rudolf’s copy “Von Herzen—Möge es wieder—Zu Herzen gehn!” That is, “From the heart – may it return to the heart!” If no individuals loved him deeply, he could still reach out to the heart of the entire world.