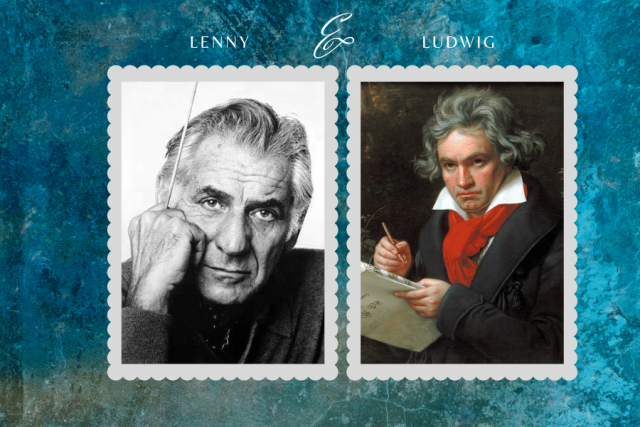 Next week brings the 30th anniversary of Leonard Bernstein’s death. As I’ve listened to Beethoven recordings this year, I’ve been struck by the intimate connection between the most charismatic conductor of the 20th century and the most important composer of the 19th.

As a member of Tanglewood’s first class of conducting students in 1940, the 22-year-old Bernstein prepared Beethoven’s Fourth Symphony and won the attention of Tanglewood founder Serge Koussevitzky, music director of the Boston Symphony.

In the late 1950s and early 1960s, as music director of the New York Philharmonic, Bernstein became the first American conductor to record a complete set of the symphonies with one orchestra. That version of the Third Symphony, still perhaps my favorite of the “Eroica,” came with a lecture entitled “How a Great Symphony was Written.” As a teenager, I heard this insightful teacher break down a masterpiece for the first time, analyzing the opening movement of history’s most revolutionary orchestral work.

Bernstein later recorded another complete set, rather less convincingly, with the Vienna Philharmonic. When the Berlin Wall fell in 1989, he performed the Ninth Symphony in the German capital, changing the word “freude” in the climactic “Ode to Joy” to “freiheit,” or “freedom.” He augmented the Bavarian Radio Symphony Orchestra with musicians from nations involved in World War II: Germany, Russia, England, France and the United States.

Like Beethoven, he was a first-rate pianist. He recorded eight concertos but played only two composers who predated his lifetime, Beethoven and Mozart. Artur Rubinstein called Bernstein “the greatest pianist among conductors, the greatest conductor among composers, and the greatest composer among pianists.” Wouldn’t that description have fit Beethoven in his day?

And in 1990, two months before he died, Bernstein led the Boston Symphony again at Tanglewood for his 50th anniversary there. Though frail and exhausted, he chose Beethoven’s dramatic Seventh Symphony as the last piece he would ever conduct.

What gave him such a deep identification with Beethoven’s music? Bernstein liked big gestures as a conductor, and Beethoven’s work lends itself to those. Both men were musical polymaths who lived at a high emotional pitch and, as Bernstein’s recently collected letters reveal, remained proud of their accomplishments yet insecure about their impact on society.

Most importantly, each believed the arts have the power to inspire us, heal us and make us better than we ordinarily are. Beethoven grew up with the ideals of the Enlightenment; he wanted music not only to move people but to connect them to fundamental principles of the universe. Think of his exhortations to seek wisdom and fraternal harmony in the “Ode to Joy.” They pose an impossibly tall order for most human beings, but Bernstein shared those sentiments all his life.