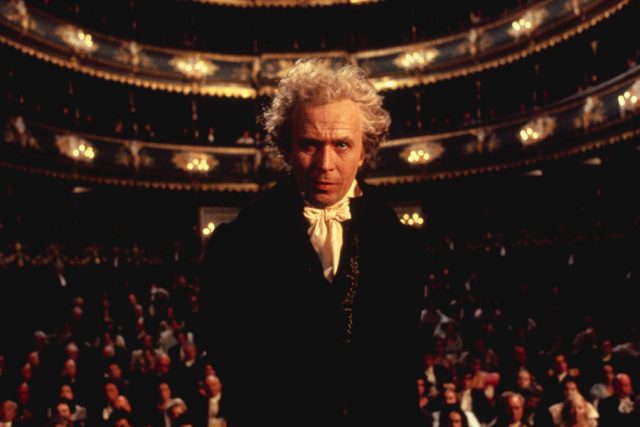 Most of us probably think Beethoven went deaf relatively early, then churned out masterpieces for decades without hearing a note. The 1994 film “Immortal Beloved” popularized that idea, and it seems as astonishing as a blind person climbing Mount Everest. (Two have done so, though the Nepalese government has now banned solo climbers and blind or severely disabled people to cut down on fatalities.)

But new evidence suggests Beethoven might have retained partial hearing up to a year before his death. A recent BBC Music Magazine article reports that Kent State University professor Theodore Albrecht has been translating 12 volumes of Beethoven’s conversation books, written notes passed to him when conversation became too difficult. Sometimes he spoke to visitors; sometimes he wrote back and kept his jottings after they left.

Scholars have long debated the cause of his deafness. “Immortal Beloved” attributes the first symptoms to a clout on the ear by his drunken father; that’s far-fetched, though Johann did beat his son when the boy disobeyed him. Lead in Beethoven’s blood seems likelier; merchants illegally added leaded sugar to sweeten cheap wines in the 18th century. Possibly diabetes and hepatitis contributed to it, or a recurrence of childhood smallpox. (He suffered ill health all his life.)

He tried many useless cures: medicines, bleeding, leeching, cold baths and lukewarm baths, even painful applications of tree bark to his body to absorb “healing” chemicals. His hearing started to fail at 27 and declined over his last three decades. Some writers believe he heard almost nothing as early as the premieres of the Fifth and Sixth Symphonies in 1808.

Yet he reportedly listened through an ear trumpet to his nephew playing a piano in 1820, when Beethoven was almost 50. Three years later, says Albrecht, he advised a man going deaf, “Do not use mechanical devices too early; by abstaining from them, I have fairly preserved my left ear.”

Albrecht thinks the composer could hear at least some of his Ninth Symphony at its premiere in May 1824 and may faintly have heard the last premiere he supervised, his String Quartet No. 13 in B Flat, in March 1826.

I’d like to think so. Beethoven’s life contained so much unhappiness – physical, romantic, familial, financial – that it cheers me to believe he could appreciate on some level the extraordinary music he gave us.