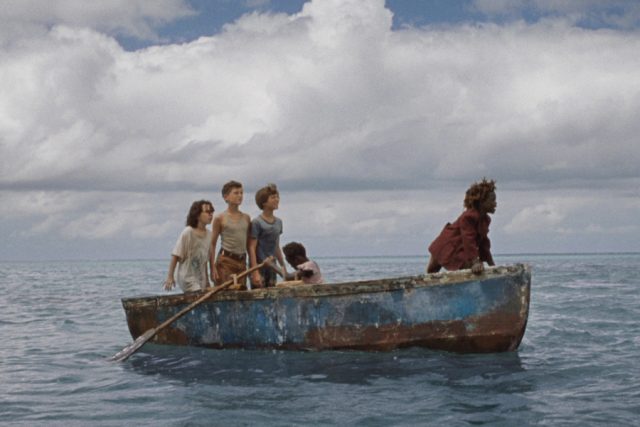 However cheerful the musical and animated versions may be, “Peter Pan” has a core of sorrow.

The title character can never form a lasting relationship; he jaunts from pleasure to pleasure, with a past he can barely remember and a future he cannot contemplate. The children who visit his Island of Lost Boys realize that responsibilities encroach on everyone else, hair turns gray, childhood thrills become half-forgotten memories that cannot be recaptured. “Real” life has compensatory beauties but also drawbacks, and you can’t escape those.

Benh Zeitlin (“Beasts of the Southern Wild”) has directed his second feature in eight years in “Wendy,” working successfully again with untried young actors. He updates the story to an unnamed Southern location – he shot much of the film in Louisiana, some in the Caribbean – and Peter (steely-eyed Yashua Mack) no longer flies into the lives of the Darling children. He arrives atop a steam-belching train, a stowaway encouraging them to run off from their dead-end town to a place where no one needs to grow up.

Wendy (intense Devin France) and her genial twin brothers (Gage and Gavin Naquin) take that ride and land in a place where kids play eternally. Inhabitants have limited magical powers, expressed mostly in partial dominion over their environment. (So did the young heroine in “Beasts.” Both movies insist happiness requires harmony between humans and Nature.)

The presence of an immense, glowing aquatic creature they call “Mother” keeps them young. Thoughts that bring discontent, doubt and fear make them old: Fail to delight in Peter’s process, and you become one of the aged wrecks rambling around the dusty edges of his green isle. Wendy decides to help both kids and crusty elders find happiness in the real world, but salvation depends on cooperation.

Zeitlin co-wrote the music with Dan Romer and the script with Eliza Zeitlin, his wife; she also handled production design. “Wendy” benefits from a low-key personal vision that’s long on concept and short on details, though we don’t really require them. Why Peter came to his tiny fiefdom and how he ascended to authority don’t matter; we need only to understand that no one can become a full human being without leaving it.

Scottish author J.M. Barrie wrote his play “Peter Pan” in 1904, three years after Queen Victoria died. The movement for Scottish home rule had stirred two decades earlier, so perhaps he was metaphorically urging Britain to grow up and abandon the idea of stomping around the world, doing whatever it pleased in its self-declared empire.

Zeitlin’s subtle interpretation arrives in a United States disunited by immaturity and selfishness. Could he be encouraging us to behave more like adults and less like spoiled brats for whom no day of reckoning will ever come?