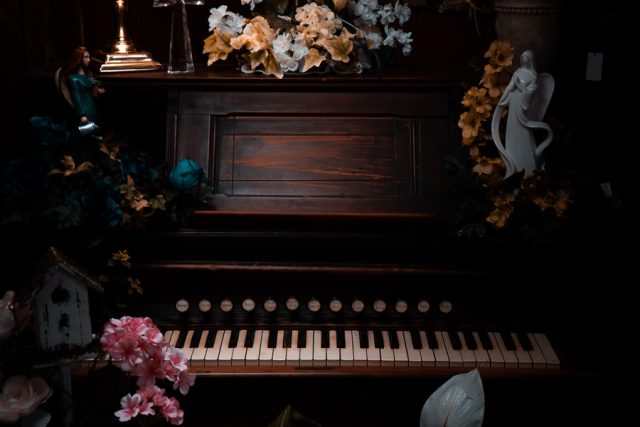 November 7, 2019WDAV BlogMy Year with Mozart, News & Features, UncategorizedLawrence ToppmanComments Off on A keyboard in every home? Once upon a time….

At the age of 7, when I visited my Aunt Nan and Uncle Milt in northern New Jersey, I knew they had more money than my parents: They owned a baby grand piano.

I never saw them or my two cousins play a note; it sat, impassive and unloved, in their living room. Why was it there? Because when my aunt grew up in the 1920s, every reasonably affluent family had a piano.That had been true for more than 150 years, and it’s one reason Mozart wrote so many keyboard works. He created the concertos mostly as showpieces for himself and the harder sonatas for gifted amateurs. But he aimed easier sonatas and works for four hands at one keyboard toward modestly talented pianists, who played at family gatherings or among friends.

These compositions kept Mozart, Beethoven (who preferred songs) and Schubert in business when commissions became scarce. Brahms and Dvorak achieved widespread fame not with great symphonies, which critics and upper-class listeners embraced, but with the publication of dances – Hungarian for Brahms, Slavonic for Dvorak – which could be played at home.

As we zombify ourselves with social media, the notion of socializing around a piano bench appears laughably archaic. Even the idea of singing and dancing in a pub or beer garden seems like something we’d see in a movie about life in Europe before World War II.

Yet young men and women of various classes took piano lessons in cities and small towns right up until The Depression. If you had enough money for an upright, a teacher came to you; if not, you went to her. (They were generally female.) Boys and girls courted across keyboards, singing and playing romantic ballads. Mothers instilled seeds of culture in reluctant youngsters through Dvorak’s Humoresque No. 7 and Beethoven’s Minuet in G. (See “The Music Man.”)

Radio and the international economic slump of the 1930s dealt the first serious blow to home piano playing. Television delivered the fatal punch in the 1950s, abetted by transistor radios and long-playing records: If you could carry music everywhere, you never needed to make any yourself.
The dust on my aunt’s piano deepened, and its top became a repository for photos or drinks at parties. The disconnection of family members, so loudly lamented today, had begun in earnest.