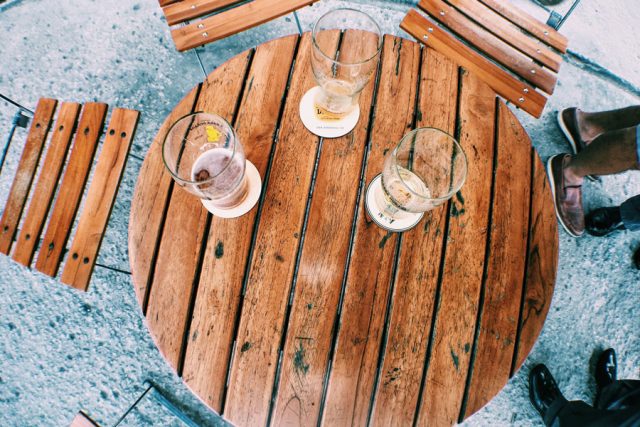 September 19, 2019WDAV BlogMy Year with Mozart, News & FeaturesLawrence ToppmanComments Off on Bach, Mozart, beer and me

A confession: I can’t see any way I’ll live up to the promise I made at the beginning of this journey in January. I am two-thirds of the way through writing “My Year With Mozart,” and I doubt I’ll listen to every piece of music WAM wrote before reaching the last blog post.

I’ve gotten well into the symphonies, listened to all the concertos, absorbed most of the chamber music, tried stuff I’d never heard – for example, his plebian organ sonatas – and started to explore the choral repertoire, which is larger than I’d realized.

But like a kid who leaves his broccoli for last, I’m not sure I can face the sea of concert arias indistinguishable to me. Or, perhaps, the juvenile operas that are as long as the mature ones but one-tenth as inventive. Those may come later in my lifetime, after I retire. Or in another lifetime.

A late friend believed J.S. Bach never wrote a piece that didn’t need to be heard. Every organ chorale or trio sonata demands our attention, he used to say. Listen endlessly and intently, and you too will come to believe nothing can be skipped without loss.

This recalled the argument my college roommate made when I told him I didn’t like beer. “You have to drink a lot to get past the point where you don’t enjoy it,” he told me. “Eventually, you’ll develop a taste.” I pointed out that, if I still didn’t like it, my wallet would be a lot lighter, and I’d be a lot heavier. “Nah, it always works,” he insisted. I later heard a similar claim made for fatherhood but haven’t tested either one. It turned out not to be true for Bach.

I’ve taken a stab at Mozart’s concert arias before. I remember them as melodious in a bland, long-winded way and full of generalized emotion, usually joy in the beloved or sadness in the lack of the beloved. (Don’t confuse these with his pithy, pungent songs. They’re snappy.)

Yet the relatively small percentage of Mozart I’m reluctant to encounter proves how amazing the bulk of his output is. Measured like a baseball player, I think he’d have the highest batting average of any composer who wrote prolifically.  But even the greatest geniuses sometimes sleep when they take pen in hand.