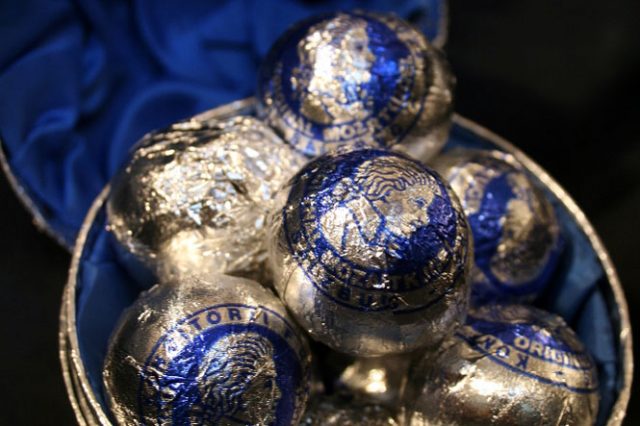 I tasted my first Mozartkugel in college, when an Austrian exchange student passed a box around. I couldn’t have said what was in them – apparently, pistachio marzipan and nougat covered with dark chocolate — but I remember scarfing them down greedily. I neither knew nor cared who Mozart was, because I hadn’t yet had my first music appreciation course. He was just a guy whose beaky-nosed profile graced an imported candy.

Fans of these sugar balls can go to here to learn more. My three favorite factoids are these:

1)  Salzburg confectioner Paul Fürst invented them in 1890, and his descendants still make them by hand. At least eight other candy makers have created copies of various kinds, but by industrial processes. An imported 7.7-ounce Reber Mozart Specialties Gift Box ($37 via Amazon) contains chocolates of various flavors and shapes, including something described as “Mozart pie.”

2) Copyright entanglements resulted in rulings as to which could be round and which must have flat sides, which could have “Real” in their names, and which had to be designated Mozart-kugeln (with a hyphen) instead of Mozartkugeln.

3) Salzburg artists built 80 polyester Mozartkugeln, each five feet across, and put them in the city’s old town in 2006. One cannot have beauty without stupidity, alas, and vandals caused 7,000 euros worth of damage by unbolting one and rolling it into the street.

Aside from making my mouth water, this contemplation of Mozart Spheres (that’s one meaning of “kugel” in German) has made me wonder, “Why Mozart?”

He’s not the world’s most beloved classical composer: That would probably be Beethoven or Tchaikovsky, and you never see Beethoven Balls or Tchaikovsky Treats. Nor does one encounter Bach Rocks, Schubert Sugarsnacks or Brahms Bombs. (I would buy one of those sight unseen.)

Yes, a Salzburg confectioner named his product for the most famous celebrity from his home town – really the only one, unless we count physicist Christian Doppler, and Doppler Dream Bars probably wouldn’t sell as well. But nobody else, as far as I know, has named a candy for a composer.

I think it’s because Mozart epitomizes the spirit of joy in his buoyant symphonies, vivacious concertos and witty comic operas. Whether absorbed by ears or mouth, he and his candy are linked because they provide unfailing pleasure.