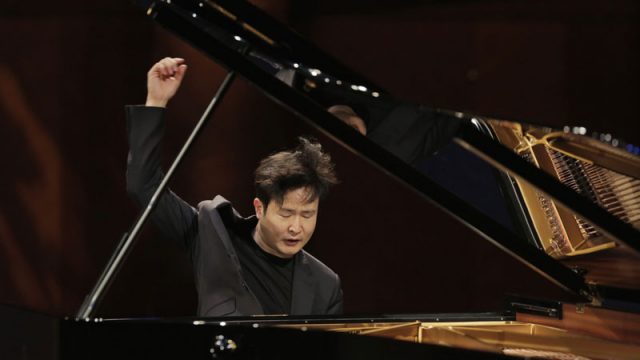 August 8, 2019WDAV BlogMy Year with Mozart, News & Features, UncategorizedLawrence ToppmanComments Off on Do Mozart and Asia go together?

Half an hour into “Let the Bullets Fly,” an insanely complicated Chinese movie about bandits and warlords in 1920, the mayhem stops long enough for the antihero to put Mozart’s clarinet concerto on a gramophone.

As the bandit and his adopted son listen to the mournful slow movement, the boy asks, “Where is this Mozart? How can I find him?” His father musingly replies, “He is far away from us.”

He speaks geographically and chronologically, assuming he knows Mozart died 129 years earlier. But does he also speak aesthetically, suggesting they cannot connect with this music? Soon, they go back to shooting people.

That got me wondering why so few Asian pianists and violinists play Mozart. Look at the discography of Lang Lang, the world’s best-known Asian pianist: Out of 20 live and studio albums, he has devoted one to Mozart. Yundi Li has played one piano sonata on a recital album; Yuja Wang has recorded nothing. Yekwon Sunwoo, the Cliburn winner who played here in the final Charlotte Concerts season, has recorded nothing and told me he hardly plays any.

Kyung-Wha Chung, who has cut dozens of albums and gets my vote for greatest Asian violinist of all time, hasn’t recorded a note of Mozart. (Neither has her brother, conductor Myung-Whun Chung.) Versatile Sarah Chang hasn’t recorded any. Nor has pop/classical sensation Vanessa Mae, unless you count the “Adelaide” concerto scholars no longer think WAM wrote.

I came up with one notable exception in each case: Violinist Midori has recorded concertos and sonatas, and the great Mitsuko Uchida (who moved to Austria at 12 and is now a naturalized British citizen) plays a vast repertoire of piano concertos, sonatas and works for four hands.

The issue can’t be technical difficulties, lack of interest in pre-Romantic music – Asian soloists play Bach and Schubert – or anxiety about conveying certain moods or emotions, because Mozart runs the gamut from orderly serenity to tempestuous drama. There’s something in him for any pianist or violinist to explore.

Yuja Wang handles heavyweights from Ravel to Rachmaninov, Yekwon Sunwoo glories in Brahms’ complexities (and plays him soulfully), and Kyung-Wha Chung can be poised in Bach or passionate in Dvorak. Mozart’s music simply doesn’t seem to speak to them as it does to pianists and violinists from Russia to America, and I can’t figure out why that should be.