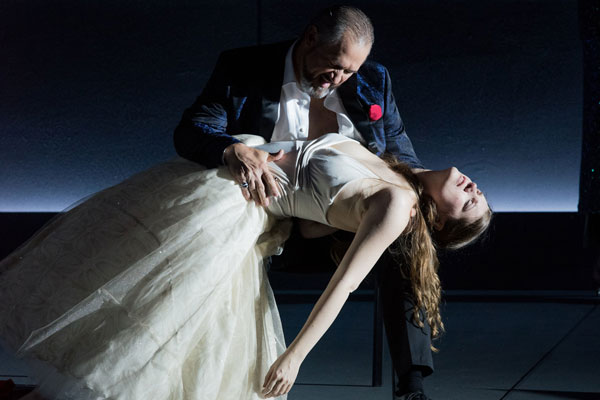 I attend Spoleto Festival USA every year because it’s the kind of place where a beach ball might determine what you’re about to see. That’s what happens on audience-choice nights for performances by Shakespeare’s Globe.

The London-based company has scheduled performances of “The Comedy of Errors,” “Pericles” and “Twelfth Night” throughout the festival, which ends June 9 in Charleston. But it has also set times when the audience decides what to watch.

Eight actors amble onto the stage, playing a loose-knit version of Duke Ellington’s “Caravan” on banjo, accordion, oddly tuned trombone and other instruments. One heaves a beach ball into the crowd, and the third person who touches it has to listen to audience applause and declare which title got the most support.

Spoleto specializes in the mind-challenging avant-garde, so it was no surprise that my audience (and one the day before) screamed loudest for Shakespeare’s most mindless gagfest, the play about twins separated shortly after birth with twin servants who were parted in infancy, too. Shakespeare beautifully crafted this absurdity, polishing a plot he stole from Plautus, and the Globe octet highlighted every bit of ribald wordplay and knockabout hijinks in “Errors.” (On this showing, the Three Stooges would have been right at home in Elizabethan days.)

The eight had to trim only a few bits of the play to make sense of it with so small a cast. They also brought out the mock-serious side: Characters deal with potential execution, presumed adultery, imprisonment, brief commitment to a madhouse and emotional upheavals of other kinds, and the Globe players lent these sections as much weight as Shakespeare would allow.

By contrast, the theater company 1927 gave audiences a show as light as a balloon and left us floating somewhere in the universe, like the massively obese feline in the first of its many fairy tales. “Roots” carried no message – except, perhaps, that life holds catastrophes for every human being and most animals – but delivered zen-like stories in a weirdly funny way.

Two cast members played a dozen or so instruments – my favorites were a musical saw and a warped version of an Asian lute – while two others stood in front of a backdrop or poked their heads through it. (All wore whiteface.) A combination of cartoonish video projection, mime and dialogue gave the impression that characters and locales were moving, and the deadpan seriousness of the macabre stories made them hilarious. At the end, walking out, an audience member said, “It must mean SOMETHING.” Mmmmmm…not necessarily.

The operatic version of “Salome” tried desperately for deeper meaning and, for one hour, succeeded. Directors Patrice Caurier and Moshe Leiser, who set this same opera in Nazi Germany so effectively at Spoleto in 1978, have reimagined it as a story for our time. They have set it atop the roof of a modern penthouse, where the title character goes to escape Herod’s noisy party below.

Melanie Henley Heyn sang beautifully and expressively across her range, playing Salome as a lonely, sheltered girl whose first attraction to a man – unfortunately, woman-hating John the Baptist – goes terribly wrong. But the character doesn’t work if she’s just a victim, someone so brutalized by men that she asks for the Baptist’s head as vengeance against a gender that has abused her sexually and psychologically. (Paul Groves sang Herod, her molester stepdad, with the right fervor, though Erik van Heyningen made a lightweight prophet.)

To achieve their aims, the directing team began to ignore stage directions from librettist Hedwig Lachmann (who adapted Oscar Wilde’s play), demanded action that went against the grain of Richard Strauss’ music and actually changed the outcome of the opera. I heard the word “daring” tossed around afterward. It would also be daring to stage a “Hamlet” where the prince jumped up in Act 5 — “The poison didn’t kill me!” — and danced his way onto the throne of Denmark. Would you want to see it?