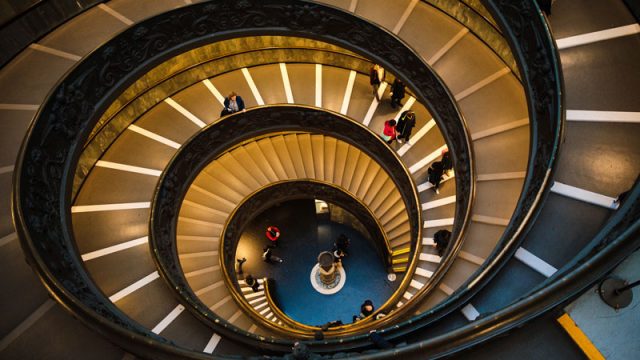 April 25, 2019WDAV BlogMy Year with Mozart, News & Features, UncategorizedLawrence ToppmanComments Off on An Entire Universe in a Single Keyboard

I saw Maurizio Pollini this month at Carnegie Hall, where he played Brahms, Schumann and nearly an hour of Chopin, including two encores. He walked slowly, stiff-legged and slump-shouldered at 77, toward the Steinway on the otherwise naked stage. But electricity shot from his fingers as he played.

When I came home, I remembered that I owned Pollini’s recording of my favorite piano concerto, Mozart’s 23rd. I put it on and marveled at the pristine joy and sadness he brought to it, like feelings recollected in Olympian detachment. How right, I thought. Then I put on Murray Perahia’s heart-on-the-sleeve version, with its profound adagio (the only one Mozart inserted into a piano concerto) played for maximum emotional effect. How right, I thought.

Then I binged. I listened to Wilhelm Kempff’s calmly elegant rendition, Robert Casadesus’ buoyantly Gallic take, Clara Haskil’s quietly melancholy interpretation, Vladimir Ashkenazy’s more upbeat playing – stressing the joy in the first movement and the rondo finale – and Annie Fischer’s powerful and dignified reading. I heard it with cadenzas by the performers and Ferruccio Busoni (absurdly but entertainingly grand) and Johann Nepomuk Hummel, who briefly tried to turn it into a concerto by … J.N. Hummel.

Think about that. You can’t find a dozen different ways to play Edvard Grieg’s lone piano concerto or the two by Liszt or the two by Brahms or the three by Tchaikovsky. Beethoven allows for more variety, but his five have limits, too: You can’t really have a gleeful fifth concerto or a delicately poetic third. Glenn Gould played the Emperor with Classical-Era daintiness – a nutty idea, like so many of his – and blew it, though it’s a guilty pleasure for me.

Only Mozart offers nearly infinite ways to interpret his intentions for piano and orchestra. That’s not to say his concertos can’t be performed without depth or sparkle or absurdly fast or painfully slowly. But if you love him, you can probably express that love in any way that makes sense to you and make the listener love him, too. That’s why I’m spending so much of this year in his company.