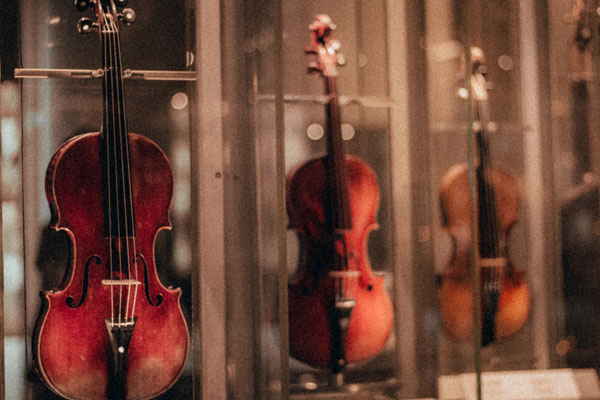 February 21, 2019WDAV BlogMy Year with Mozart, News & FeaturesLawrence ToppmanComments Off on The instrument nobody loved – except Mozart

“Why don’t violists play hide and seek? Because no one would look for them.”

“What’s the difference between a violist and a dog? A dog is able to stop scratching.”

These and 10 other snarky comments come from a Classic FM article about the much-maligned middle child of the string section, which hasn’t gotten the respect other instruments receive.

Maybe that’s because violas often go unheard by audiences. They have special difficulties projecting over a full orchestra, so no top-tier composer ever wrote a solo concerto for them. Hector Berlioz’ “Harold in Italy” comes closest; it’s a symphony with solo viola parts.

But Mozart loved the viola. His Sinfonia Concertante for Violin and Viola remains the most beautiful piece written – well, half-written – for that instrument. The father-son team of David and Igor Oistrakh made my favorite recording, though Charlotte Symphony Orchestra music director Christopher Warren-Green also did a fine one; he played violin with his London Chamber Orchestra and violist Roger Chase.

Haydn’s the father of the string quartet, but Mozart created the string quintet. Instead of using two cellos, as Schubert did in his magnificent final chamber work, Mozart put in two violas. His most profound quintet, the dark and melancholic No. 4, inspired Brahms and Dvorak to write for the same lineup. Even when Mozart tackled a horn quintet, he doubled the violas, instead of grafting the horn onto a traditional quartet of two violins, one viola and one cello.

Why did he champion the instrument?

First, for the aural bridge it provides between the violin and cello; he, more than any other composer, believed in a balance of sounds and emotions.

Second, for the warmth of its tone, especially in small ensembles.

Third, he liked to play it and often filled the viola chair in his own chamber music.

His father claimed Wolfgang could have been Europe’s greatest violinist, had he stuck with that instrument. But he stopped composing violin concertos at 19 and highlighted the viola until eight months before his death at 35; his sixth string quintet is his last great chamber piece.

Mozart made dismissive remarks about his output for flute and horn – and the people for whom they were written – but history does not record that he cracked jokes about the viola.