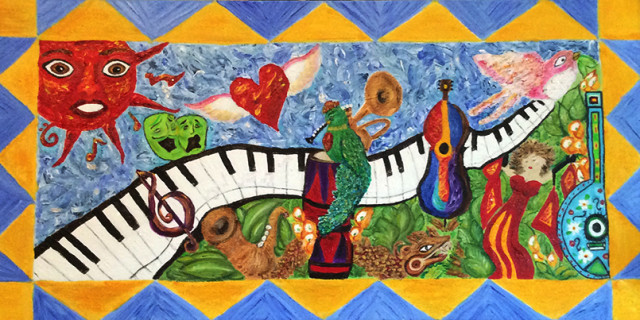 On November 11, 2014, Davidson College will host Arts Jubilee, a showcase of arts and crafts created by members of the college staff. Among the paintings in the show will be Mi Concierto, a work by Myelita Melton, associate producer of WDAV’s bilingual show Concierto and host of the station’s weekend programming. The work was inspired by her work with Concierto, and she offers insight into how her love for the arts crosses genre and medium while inspiring both. 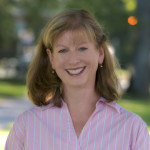 WDAV: What inspired you to create “Mi Concierto”?
Melton: The music on Concierto evokes great memories from my adventures traveling in Latin America. After high school I lived with a family in Mexico and attended an instituto to learn Spanish. Since then, I’ve been fortunate to visit several Latin American countries, including Cuba. Mi Concierto is a reflection of the people I’ve met, the places I’ve seen, and the music I’ve enjoyed.

WDAV: Describe Mi Concierto’s style and the images you’ve selected.
Melton: Stylistically, Mi Concierto is a combination of Mexican folk art and French Impressionism with lots of added texture. I have filled it with iconography easily recognizable to Latinos, no matter where they come from. These include Concerto’s sun logo, along with religious icons like a “sacred heart” and a peace dove. In honor to the indigenous people of Latin America, I’ve placed a quetzal bird in the center. Its feathers were used in ceremonial headdresses. It still soars in the mountains of Central and South America. The quetzal perches on a conga drum above Quetzalcoatl, the mythical feathered serpent worshiped by the Maya centuries ago. Quetzalcoatl is carved on pyramids in Yucatan. Lastly, the musical images represent the wide spectrum of musical genres Concierto features.

WDAV: Describe some of the important imagery in Mi Concierto.
Melton: That’s the calla lily. It comes in all colors and is found throughout the Americas. It’s often included in paintings by Latin American artists. For me, it’s a very personal image because of a shop keeper in Costa Rica who gave me a long-stemmed, white one at the terrifying summit of Sierra de los Muertos (Hill of the Dead) when I was there in 2007.

WDAV: Do you listen to music while you paint?
Melton: Of course! If the painting is vibrant, I’ll choose something up tempo like mambo, samba, or salsa, but if the piece is somber, I’ll select something from the Romantic era.

WDAV: When did you begin painting?
Melton: I have always been an artist. My family says I started entertaining before I could crawl. When I was little I loved to draw! My favorite thing was a big box of 54 Crayola crayons that came with a sharpener on box. Back then a new set of crayons gave me a kick, now I get the same thrill from new paint brushes.
My artistic adventure is unusually comprehensive. My early experience in theater propelled me into recording. Producing a documentary film in 1990 and operating a cable ad company enabled me to develop artistically as a videographer, editor, photographer and copywriter. Those talents and speaking Spanish became my springboard to jobs in television news and radio. But my creative drive doesn’t stop there. Since 2000, I have written and published a series of 13 industry-specific Spanish books. Even though I’ve only been painting for a couple of years, I think it’s a natural progression in my “all-inclusive” artistic journey.

WDAV: What Paintings Are You Exhibiting in the “Arts Jubilee”?
Melton: Four of my paintings are in the exhibit: Appassionata, Árbol de Vita (Tree of Life), Damaged Goods, and Mi Concierto.