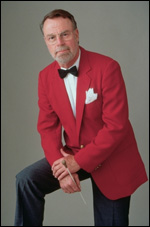 Erich Kunzel, whose name is synonymous with the classical pops genre, has died in a hospital in Maine where he lost his 4 month battle with cancer of the pancreas, liver, and colon. He was 74.
Kunzel led pops performances in Cincinnati for 44 years, and was at the helm when the Cincinnati Pops Orchestra was founded in 1977. He was a revolutionary in the pops genre bringing in jazz artists such as Ella Fitzgerald and Benny Goodman as soloists when it wasn’t commonplace for such musicians to perform with symphony orchestras. His concerts were theatrical extravaganzas, and under his leadership the Cincinnati Pops maintained some of the highest concert attendance in the world year after year, week after week. Kunzel will also be remembered as an excellent arranger and often arranged film scores for the Pops to play.
The Cincinnati pops has created a special Web page to remember Erich Kunzel. You can also read more here. We also hope you’ll share your thoughts and remembrances in our comments section.