We ended our San Diego stay, a petite week, by one more festive visit to Dog Beach before heading up the coast. Sure enough, exiting the accursed I-5 to the Pacific Coast Highway, we saw signs to Doheny Park and Laguna Beach, and the Beach Boys started belting out “Surfin’ Safari.” I did not plan it, honest, my playlist did it on its own. I kept the volume a tad down for fear of being considered uncool by California standards, but beefed it back up when I saw a restored woody with a rehabbed surfer at the wheel headed back down PCH to Doheny. What are North Carolina license plates in Orange County, Calif. worth if you can’t play your tourist music as loud as you want, hmm? Anyway, I put some 20-year-old ghosts to rest in Laguna, then got caught in Pageant of the Masters traffic, thence sucked up toward L.A. before deciding to barrel east on the 10, to the welcoming hospitality of John Gilmore, M.D. ’69 & Cie in Palm Springs. 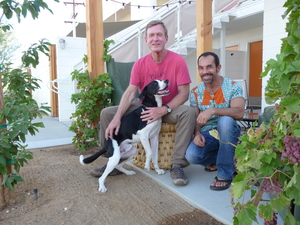 Next noon, after Dodger and I had discovered the municipal dog park for a 100-degree attempt at a romp, John and his friend Antonio picked me up in John’s Hyundai SUV, unfancy but sleek and, O, blessed air conditioning! After a midday tour of some of Palm Springs’ history and Hollywood seductions, we headed to Nan’s at The Parker (the hotel where Robert Downey, Jr. was busted for coke the first time, I was informed). I had lox and bagels and caviar like I have never had—well, okay, I have never had it at all—then a quick tour of the spa area, where Antonio, a bodyworker, used to work. The spa area was sadly empty, a sign of our times, but I did have a moment to recline in the sumptuous lobby and examine each element of the most careful, simple, and elegant design of a public space I have witnessed, courtesy of Jonathon Adler. Each chair cost more than all my furniture together, I feel sure.
Then, we went to the movies, that old Southern remedy to beat the heat that anybody whose mama did not raise a fool just knows, no matter what part of south they end up in. John’s a West Virginia native, went to med school there after Davidson, and in his final year, did a cross-country trip somewhat analagous to mine now, only not so much. He did medical externships along the way in Boston, at Mayo, in Colorado, and in New Mexico, before finishing up and moving to Colorado for residency, then on to doctoring gigs in Hawaii and then San Francisco before being recruited to HIV/AIDS medicine in Palm Springs 10 years ago. Now he splits his time in private practice between HIV/AIDS medicine and internal medicine (“pediatrics for grown-ups”).
After the movie, Away We Go, highly recommended, we drove down Bob Hope Boulevard and saw more sights of the rich and famous. We even drove right up to the gate of the Betty Ford Clinic and peeped, but all I saw was some ducks. They were sitting in a little circle. Maybe it was group.
So now I’m back home at the ACE, doing laundry in between dips in a tepid pool lined by misters—water misters, to keep cool, like everywhere here in the summer—that really do work quite well. Another Saturday night….
On my most recent trip back from the coin-op room, I saw this little contraption, which the handyman pointed out not only is quite green, but helps keep off the old spare tire. I can just picture physical plant and IT staff at Davidson tooling around campus on one of these! 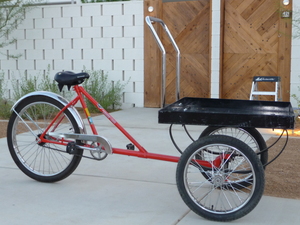