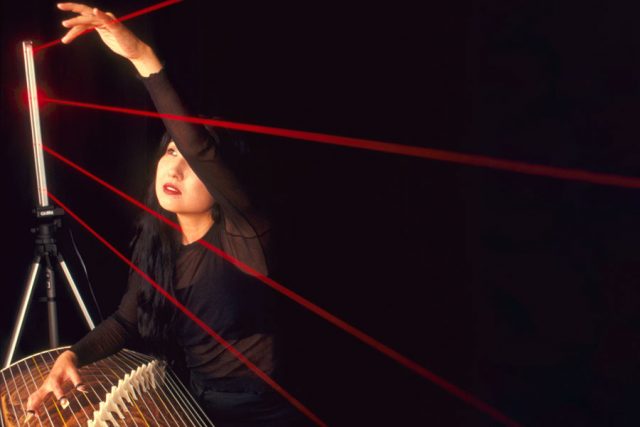 What does AANHPI stand for? “AANHPI” is short for Asian American, Native Hawaiian, and Pacific Islander Americans, a vast, diverse group including manifold cultures, identities, and nationalities. May is AANHPI Heritage Month, observed annually to recognize the history, achievements, and influence of AANHPI individuals and cultures in the United States. Before the month comes to a close, take a moment to get to know five artists from AANHPI communities who are building lasting legacies in classical music.

Though Native Hawaiian baritone Quinn Kelsey is no stranger to the world’s most famous opera stages (in fact, he’s playing the title role in Rigoletto and starring in La Bohème at the Metropolitan Opera this season), one of his recent projects hits much closer to home. Last year, Kelsey was the first classical artist to perform as part of the Hawaiʻi Opera Theatre’s Opera Kanikapila project, which matches opera singers with Hawaiian musicians from different backgrounds in a series of collaborative concerts. In an interview with Opera World, Kelsey expressed how deeply he appreciated the experience of working with ukulele virtuoso Taimane, explaining that the process “opened the door in order to access my own culture more.”

Kelsey, who is perhaps best known for his Verdi interpretations, is a recipient of the 2015 Beverly Sills Artist Award and a 2022 Opera News Award.

Fun Fact: Kelsey’s time with the Hawaii Opera Theatre didn’t start with Opera Kanikapila! He got his start as a chorus member with the company in 1991.

Composer, musician, and sound artist Miya Masaoka has been a driving force in contemporary classical and experimental music for decades, often incorporating traditional Japanese string instruments into her work in unexpected ways. With compositional interests including “instrument building, wearable computing, and sonifying the behavior of plants, brain activity, and insect movement,” Masaoka’s wide ranging works often explore the natural world and themes of social justice. A 2021 Guggenheim Fellowship recipient, Masaoka is the director of the Sound Art MFA program at Columbia University and has been teaching at New York University and Bard College since 2002.

Lauded by Opera News as “one of the stars of his generation,” Sean Panikkar is an internationally sought-after American tenor of Sri Lankan heritage. Panikkar’s recent credits include performances at the Salzburg Festival, the Festival d’Aix en Provence, the Metropolitan Opera, and a starring role as Gandhi in the Los Angeles Opera production of Satyagraha. An esteemed interpreter of contemporary music, Panikkar’s performance in the title role of Jack Perla’s Shalimar the Clown at the Opera Theatre of Saint Louis was praised by audiences and critics alike (including a particularly glowing Broadway World review).

If you listened to our live broadcast of the Charlotte Symphony performing Beethoven’s 9th Symphony on Saturday, you may be more familiar with Panikkar’s voice than you think! He was the tenor soloist in the concert.

Fun Fact: During Season 8 of America’s Got Talent, Panikkar was recruited to join the classical crossover group FORTE at the last minute when the show’s rules forced a personnel change. The group finished in fourth place and has since released 2 albums together.

Sought-after composer Reena Esmail, who “works between the worlds of Indian and Western classical music,” has garnered the attention of many of the world’s top ensembles in recent years – so much so that she’ll premiere 11 new works in 2022 alone. In a Q&A with the Seattle Symphony earlier this year, Esmail discussed one of her latest works, a Violin Concerto written in collaboration with Indian classical violinist Kala Ramnath, and how it speaks to her personal mission as a composer:

“(The piece brings) Hindustani classical and Western classical musicians into direct contact with one another, because I am able to speak to both of those worlds… I think more about how I can be that space where that intersection and connection happens. How can I and my music create that place?”

Esmail is the current Swan Family Artist in Residence at the Los Angeles Master Chorale and an Artistic Director of Shastra, a nonprofit organization founded to connect musical traditions between India and the West. In addition to numerous other accolades, she has been named a 2019 United States Artist Fellow in Music and a 2017-18 Kennedy Center Citizen Artist Fellow.

Amid the isolation of the early COVID-19 pandemic, violinist Jennifer Koh found a new way to foster togetherness in the classical music community: with the help of composers Tania León and Vijay Iyer, she recruited dozens of composers to write short violin pieces for a series she titled “Alone Together.” Beginning on April 4, 2020, Koh premiered each piece on Instagram – eventually recording all 40 works in a digital album that won Best Instrumental Solo at the 64th Annual Grammy Awards. “It was one of the most beautiful experiences I’ve had, to be honest,” Koh remarked in an NPR interview, “to see how much my community cared about each other, and also about the younger generation and about the art form itself.”

In addition to a thriving performance career, Koh invests her time in numerous groundbreaking projects and is a member of the Mannes School of Music faculty. She is the founder and artistic director of ARCO Collaborative, a nonprofit established in 2014 that “commissions, develops, and produces new musical works that highlight artists of color and women composers.” Learn more about Koh’s work and accomplishments at her website.