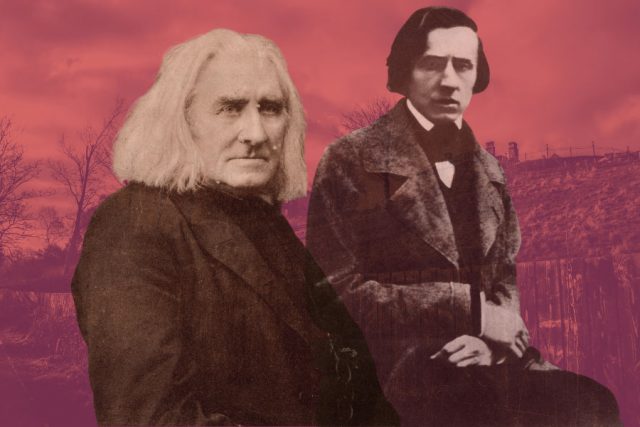 October 21, 2021WDAV BlogNews & Features, UncategorizedHalloweenComments Off on Paranormal Haunts and Happenings of the Classical Music Realm

For many listeners, hearing some of history’s greatest classical works can be a transportive experience. You’re sliding your headphones on one minute, and the next, a composer’s personality comes to life within your mind. Soon enough, Samuel Coleridge-Taylor, Rebecca Clarke, and Edvard Grieg begin to feel like old friends. But the effect might not be so comforting if, say, Beethoven showed up at your door one night.

As you’ll soon discover, that hasn’t stopped long-dead classical music icons from (allegedly) returning to the land of the living, leaving orders and nuggets of wisdom in their wake. One word of caution: you might want to read these stories with the lights on.

If your cousin’s wife’s middle school friend is to be believed, ouija boards are bad news – but Hungarian violinist Jelly d’Aranyi must have been willing to take a risk. D’Aranyi and her sister Adila, both accomplished musicians and lovers of the supernatural, reportedly spoke to the ghost of Robert Schumann through a gadget similar to a ouija board at a séance. Schumann instructed d’Aranyi to find and perform a long-lost work of his, and just like that, Jelly d’Aranyi had been chosen to premiere Schumann’s Violin Concerto from beyond the grave.

Despite this compelling news, a battle broke out over who should be the first to perform the work when its existence became public knowledge. After the dust settled, d’Arányi gave the concerto its third performance in London with great success (though it’s unclear whether this outcome was disappointing for Schumann’s restless spirit).

Schumann’s Violin Concerto has since gained recognition as an important work – and to think, we might have never heard it had it not been for his meddling ghost.

It’s closing time at the Scott Joplin House in St. Louis, and the museum’s curator is getting ready to lock up for the night. The curator turns to tell the final guest it’s time to head out, but the man, who had been idling by the window seconds before, has disappeared without a trace. Later, it occurs to the curator that the guest had looked extremely familiar – and in fact, the museum was once his home.

Well, that’s what the curator told author Tananarive Due (who was subsequently inspired to write the novel “Joplin’s Ghost”), and whether the story is true or not, there is another way we might feel Joplin’s phantom presence. In 1959, a St. Louis music collector uncovered player piano rolls that may have been punched by Joplin himself, and the rolls remain in good enough shape to be used today. According to Due, the sound the rolls produce “is almost like having a ghost in the room.”

More from Tananarive Due – and snippets of what could be Joplin’s handiwork at the piano – can be heard here in a 2006 NPR segment.

Masterpieces from Beyond the Grave?

A visit from a spectral stranger in a long black coat would set anyone’s nerves on edge, but for seven-year-old Londoner Rosemary Brown, the alleged encounter marked the beginning of a very unusual career path. The spirit claimed to be a long-dead composer, explaining that he would return to make her famous one day – and years later, Brown identified the visitor as none other than Franz Liszt.

In her late 40’s, Brown began to report ghostly visits from Liszt and nearly a dozen other classical music figures, claiming that the composers would dictate new works to her as she sat at the piano. Liszt’s promise was soon fulfilled: after a media firestorm erupted, Brown briefly became a household name. She went on to publish several books detailing her experiences, including “Unfinished Symphonies: Voices from the Beyond” (1971) and “Immortals at My Elbow” (1974).

But was Brown’s story too good to be true? Some psychologists and composers believed the tale, mostly because Brown’s musical training was viewed as too limited to have written such convincing imitations of famous composers’ works. Others felt Brown was simply a genius who had pulled off the ultimate hoax. Whatever the truth may be, surviving recordings of Brown’s works baffle classical music fans – and inspire conspiracy theories – to this day.

Nestled in the French countryside a stone’s throw from Paris, the 18th century castle Château d’Hérouville began a new life as a recording studio in the 1970’s, attracting many of the era’s most high-profile artists (Elton John, Pink Floyd, and Cat Stevens, to name a few). However, when David Bowie arrived to record his 1977 album Low, he may have been greeted by more company than he anticipated.

You see, Frédéric Chopin and the writer George Sand were guests of the chateau at the height of their ill-fated romance in the 19th century – and there’s a persistent rumor that their spirits roam the chateau’s halls, causing mayhem and passing on ghostly messages. The story goes that Bowie instantly refused to sleep in one bedroom upon his arrival, citing inexplicable cold spots and general unease. Producer Tony Visconti, who took the room in Bowie’s place, told Uncut magazine that “there was certainly some strange energy in that chateau… but what could Frédéric and George really do to me, scare me in French?” As for whether Chopin and Sand made any appearances on the album, well… you’ll have to listen for yourself.

The Séance and Robert Schumann (The American Scholar)

Joplin’s Ragtime Style Lives on in Print and Song (NPR)

The Return of the Honky Chateau (BBC)