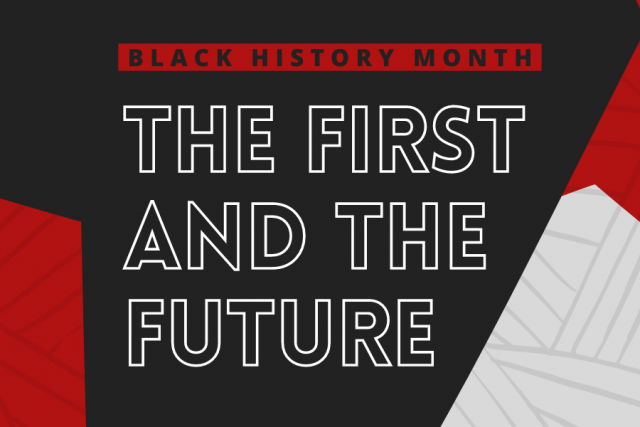 February 5, 2021WDAV BlogNews & Features, UncategorizedComments Off on Black History Month: The First and the Future

Each week throughout the month of February, WDAV’s First and The Future blog series highlights two Black composers or musicians who have shaped the course of classical music: one who shattered a historical barrier, and one whose extraordinary achievements in the same field continue today. Check back here every Friday at noon for the next pair of classical artists!

Virtuosic violinist and conductor Joseph Douglass, grandson of the famed abolitionist, orator, and writer Frederick Douglass, was the first Black violinist to tour multiple continents and the first violinist to record with the Victor Talking Machine Company (known since 1968 as RCA Records).

Following in the footsteps of his father and grandfather (who both played the violin), Douglass was encouraged to start his musical training at a young age, eventually honing his craft at the New England Conservatory and Boston Conservatory.

Douglass’ career as a concert violinist took off after his performance at the 1893 Chicago World’s Fair. For three decades, he toured extensively throughout the United States and abroad, held a tenured position at Howard University, and built a lasting legacy as a remarkable educator and concert artist.

Made up of violinist Kevin Sylvester and violist Wilner Baptiste, multi-genre duo Black Violin is known for melding classical and hip hop influences into a unique sound all their own. Classically trained musicians Sylvester and Baptiste met as high school students in orchestra class, where their shared love of hip hop and R&B drew them together.

In 2005, the duo won New York City’s “Showtime at the Apollo” competition, setting their rise to fame in motion.

Black Violin has since released three studio albums, collaborated with top artists including Alicia Keys, Kanye West, the Roots, and Aerosmith, and performed at an inauguration gala for President Barack Obama.

Sylvester and Baptiste recently earned their first GRAMMY nomination for their 2019 album Take the Stairs, which will be in the running for Best Contemporary Instrumental Album at the 2021 ceremony.

Black Violin is dedicated to educational outreach and accessibility, performing for thousands of students in North America and Europe each year. In 2019, the duo launched the Black Violin Foundation Inc., a nonprofit organization that provides access to quality community music programs and scholarships for continued study.

Legendary soprano Camilla Williams was the first African American vocalist to receive a regular contract with a major American opera company, the first Black artist to perform in a lead role with the Vienna State Opera, and the first African American professor of voice at Indiana University.  After earning her Bachelor’s degree in music from Virginia State College, Williams continued her vocal studies in Philadelphia with pedagogue Marion Freschl. In 1946, she made her New York City Opera debut as Cio-Cio San in Puccini’s Madama Butterfly, which would become her signature role.

As a concert artist, Williams toured and performed extensively throughout 6 continents, including engagements with the New York Philharmonic, Vienna Symphony, and BBC Symphony. Her voice can be heard as a soloist on the 1950 recording of Mahler’s Symphony No. 8 (listen here).

In 1963, Williams gave a recital in her hometown of Danville, Virginia to raise bail funds for jailed civil rights demonstrators and performed at the March on Washington. The following year, Williams joined Dr. Martin Luther King, Jr. a second time as a featured performer at King’s Nobel Peace Prize ceremony. Williams retired from her performance career in 1971 and later became a professor of voice at Indiana University in Bloomington, Indiana, where she remained until her death in 2012.

With a voice described as “shimmering and rich” and “glaringly powerful,” Angel Blue is one of the most sought-after sopranos of today. After starting her path as a member of LA Opera’s Young Artist Program, Blue began to build an international career and make waves in the competition circuit in the late 2000’s. In 2009, she was named an Operalia finalist, coming in first in the Zarzuela competition and second in the Opera competition. Blue has since appeared in leading roles with the world’s top opera companies, including regular engagements with the Los Angeles Opera, San Francisco Opera, Theater an der Wien, and many others.

In just the last 6 years, Blue has performed in over 35 countries, most recently appearing in Staatsoper Hamburg’s production of La bohème as Mimì (2019) and making her Metropolitan Opera debut as Bess in Porgy and Bess (2020). For more information on Blue’s past performances and accolades, click here to visit her official website.

Likely born in Philadelphia in 1792, Francis “Frank” Johnson was a prolific composer, band leader, and multi-instrumentalist known as a virtuoso of the keyed bugle. When he became the first African American composer to publish a composition as sheet music in 1818, Johnson’s path to fame began. He would go on to publish well over 200 pieces during his lifetime, many of which survive only in manuscripts and piano transcriptions.

Johnson also founded and led Philadelphia’s famous Francis Johnson Band, a brass ensemble originally made up entirely of Black musicians. Word of the band’s remarkable sound spread to all corners of Philadelphia society, and in 1837, Johnson conquered another first: the band was invited to perform for Queen Victoria at Buckingham Palace, making him the first African American band leader to tour in Europe.

Throughout his career, Johnson was commissioned to compose music for several significant events, including the 1824 return of Revolutionary War figure General Lafayette to the United States, and maintained a private music studio of both Black and white students. Though Johnson’s exact playing style remains a topic of debate due to limited documentation, many of his works were revived for the 1990 Chestnut Brass Ensemble CD The Music of Francis Johnson & His Contemporaries: Early 19th-Century Black Composers.

Read more about Johnson’s life and work at his bio in the University of Pennsylvania archives.

Z graduated from the University of Colorado at Boulder with a degree in classical voice in 1978 and soon began to experiment with voice processing, leading her to develop the multifaceted sound she is known for today.

Her international career has included engagements and installments with Bang on a Can at Lincoln Center, La Biennale di Venezia, San Francisco Symphony’s SoundBox, and more, and she has completed commissioned works for chamber ensembles such as the Kronos Quartet, Eighth Blackbird, and the Left Coast Chamber Ensemble.

A truly groundbreaking artist in her field, Z has earned numerous prestigious awards including the United States Artists fellowship, the Guggenheim Fellowship, the ASCAP Music Award, and many others. Z’s interactive work Baggage Claim is permanently installed online for public viewing.

Visit Pamela Z’s official bio to learn more about her artistry and style.

Revered as the first Black woman to achieve international recognition as a choral conductor, Eva Jessye began her career as a music teacher in 1914 after earning two Bachelor’s degrees from Western University and Langston University. Twelve years later, Jessye founded the Dixie Jubilee Singers, a multi-genre ensemble that would later become the famed Eva Jessye Choir.

She and the choir soon relocated to New York, where they found remarkable success: throughout the 1920s and 30s, they made regular appearances in the Capitol Theatre stage show, performed on the radio extensively (including a regular spot on the Major Bowes Family Radio Hour), and recorded on Brunswick, Columbia, and Cameo records. In 1935, the choir was selected to perform in the original production of George Gershwin’s Porgy and Bess, and Jessye herself was chosen as the production’s choral director. The Eva Jessye Choir’s popularity climbed for decades, and in 1963, the ensemble was chosen to be the official choral group of the March on Washington.

Along with her choral conducting career, Jessye published several beloved compositions and spiritual arrangements, which remain widely performed today. Her home state of Kansas declared October 1 “Eva Jessye Day” in 1978, and in 1982, Governor John Carlin named her the “Kansas Ambassador for the Arts.”

Visit Eva Jessye’s Black Past biography to read more about her accomplishments and legacy.

Jeri Lynne Johnson is an acclaimed conductor and orchestra founder based in Philadelphia, PA. Like Eva Jessye, Johnson’s achievements include a historical first: she was awarded the Taki Concordia Conducting Fellowship in 2005, becoming the first African-American woman to win an international conducting prize. Johnson’s career has included engagements with the world’s leading orchestras, including the Philadelphia Orchestra and Germany’s Weimar Staatskapelle, world-premiere performances with MacArthur Genius Grant Winners, and a collaborative appearance at Carnegie Hall with Jay-Z, Alicia Keys, and The Roots.

In 2008, Johnson founded Philadelphia’s Black Pearl Chamber Orchestra, which features “top musicians in the country from diverse cultures and ethnicities as a model for the 21st-century orchestra.” Now a beloved staple of the city’s cultural landscape, Black Pearl has the distinction of being the only organization in the United States to win three Knight Foundation Arts Challenge grants.

Today, Johnson serves as the Artistic Director of the Black Pearl Chamber Orchestra and the current cover conductor of the Delaware Symphony Orchestra. Among her numerous accolades, she was named one of today’s leading young women conductors on the NBC Today Show and has been honored as a 2010 Philly 360 Creative Ambassador, a 2010 British American Project Fellow, and a 2011 Philadelphia Business Journal Woman of Distinction.