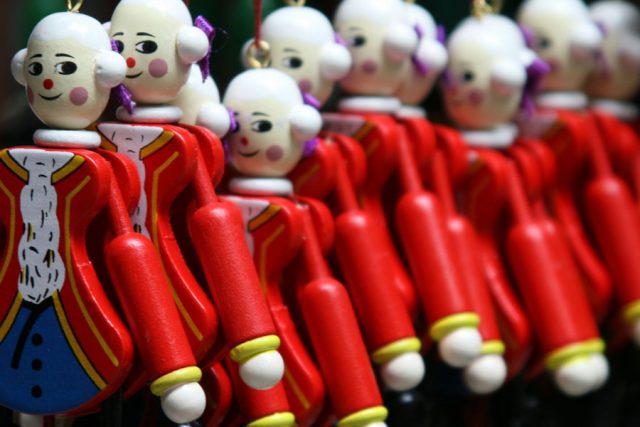 We’ve enjoyed their festive masterpieces all season long – but what were history’s most famous classical artists really up to around this time of year? These stories from classical music lore are the perfect complement to your holiday listening.

When Leonard Bernstein received the Kennedy Center Honors award in 1980, he and his family were invited to the White House as guests of the Carters (on what also happened to be the first day of Hanukkah).

The family was invited to rest in the Lincoln Bedroom, where they set up a small menorah that had been packed especially for the trip.

After lighting the first candle, singing the Hebrew blessing, and stowing the burning candles in a bathroom sink, Bernstein and his guests headed to the Kennedy Center for the ceremony. Because the event was being taped for national TV, President Carter needed to be the last person to enter – but Bernstein’s group arrived late, requiring Carter to make a second presidential entrance!

Visiting Italy may have been Fanny Mendelssohn’s lifelong dream, but based on a series of letters to brother Felix (dated New Year’s Day, 1840), the music she encountered there during a year-long visit with her husband and son left much to be desired:

“I haven’t experienced anything edifying since I’ve been in Italy… I heard the Papal singers three times – once in the Sistine Chapel on the first Sunday in Advent, once in the same place on Christmas Eve, and once in St. Peter’s basilica on Christmas Day – and I have to report that I was astounded that the performances were far from perfect. Right now they seem to lack good voices and sing completely out of tune.”

In a later letter, Felix encouraged Fanny to “pay attention to the horrendous fifths the Papal singers make when all four voices are ornamented with coloratura at the same time” – to which she responded, “I already received a clear impression of Papal fifths at Christmas.” Luckily, Fanny’s Italian vacation would tremendously improve in the coming weeks.

At a Sunday evening dinner party, Fanny crossed paths with a young Charles Gounod, who had recently won the Prix de Rome. Gounod became a beloved companion to Fanny during her time in Rome (and garnered some of his earliest musical influences through the Mendelssohn siblings).

Source: The Letters of Fanny Hensel to Felix Mendelssohn

Margaret Bonds fell in love with the poetry of Langston Hughes in 1929 while studying at Northwestern University, but it would be several years before the pair’s close friendship (and strong collaborative relationship) began.

After meeting at a mutual friend’s house, Hughes was invited to a Sunday afternoon musicale at Bonds’ family home. Bonds remembered this as the day the pair became “like brother and sister, like blood relatives.”

Both prominent figures in the Harlem Renaissance and outspoken advocates for Black artists, Bonds and Hughes constantly took inspiration from one another. Bonds went on to become a prolific composer, setting a massive amount of Hughes’ poetry to music. The most successful of their collaborations, the Christmas cantata The Ballad of the Brown King (1954), focuses on the story of the African king Balthazar – traditionally considered to be one of the Magi from the story of the Nativity

Originally conceived as a work for voice and piano, the premiere of a longer, orchestrated version was televised as part of the 1960 CBS Christmas special “Christmas U.S.A.” Hughes wasn’t able to make it to the initial rehearsals for the performance, but he expressed his excitement in a letter to Bonds: “Dear Margaret, George tells me our Ballad of the Brown King is be-au-ti-FUL!… I’ll be back in time for the performance of the Ballad, which I hear tell the CBS lady liked very much.”

At 25, Wolfgang Amadeus Mozart was confident that he was “the greatest pianist and composer in the world,” and he wouldn’t shy away from a chance to prove it. When Italian pianist Muzio Clementi happened to be in Vienna around Christmastime in 1781, Emperor Joseph II invited Mozart and Clementi to duke it out as part of the court’s Christmas Eve entertainment.

Clementi made the first move by playing his Sonata in B-flat Major, which Mozart followed with improvised variations on a march from André Grétry’s opera The Samnite Marriage (a theme provided to him on the spot). After an evening of stiff competition, no winner was declared, and both participants received an equal cash prize (though the Emperor later collected on a private wager in favor of Mozart with the Grand Duchess Maria Luisa).

After the duel, Clementi marveled over Mozart’s ability, later writing that he had “never heard anyone play with so much spirit and grace.” Mozart’s assessment of Clementi wasn’t quite so nice: “Clementi doesn’t have a Kreutzer’s worth of taste or feeling.” Ah, well. You can’t win them all.