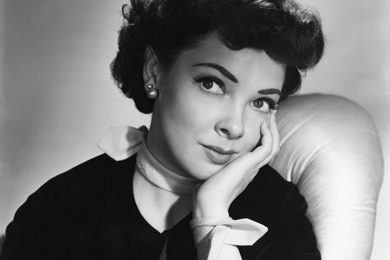 Kathryn Grayson (b. 1922 in Winston-Salem, NC) started out with a lofty dream: to become an opera star. As Kathryn sang on the empty stage of the St. Louis Municipal Opera House at age 12, a janitor was surprised by her talent and later introduced her to a voice teacher, the Chicago Civic Opera’s Frances Marshall. Kathryn trained with Marshall well into her teenage years, never losing sight of her operatic aspirations.

After moving to Los Angeles at 15, Kathryn was signed to the classical music label RCA Red Seal Records. Just three years later, her second “discovery” propelled her toward Hollywood stardom. Kathryn’s performance at a music festival caught the attention of an MGM talent scout, and though she repeatedly turned him down, the scout finally convinced her to be seen and heard by studio executives – and she was signed immediately.

The Making of a Household Name

Despite her burgeoning film career, Kathryn’s interest in opera did not fade. When she was invited to make her operatic debut at the Metropolitan Opera House after signing with MGM, executive Louis B. Mayer told her not to take the offer, arguing that it would dampen her chances as a film star.

After her debut in the 1941 feature “Andy Hardy’s Private Secretary,” Kathryn went on to appear in dozens of blockbuster films with MGM and other studios, including “Anchors Aweigh” (1945), “Show Boat” (1951), “Kiss Me Kate” (1953), and “So This is Love” (1953), starring as the opera and film legend Grace Moore. Her crystal-clear voice was key to nearly all of her roles, and operatic repertoire was often incorporated into her films to showcase her unusual ability. In musical films, Kathryn was regularly paired with costars Frank Sinatra, tenor Mario Lanza, and bass-baritone Howard Keel.

After ending her film career on a dissatisfying note (1956’s The Vagabond King), Kathryn’s earlier passion for the stage resurfaced. In 1960, she made her operatic debut as Cio-Cio-san in a production of Madame Butterfly, fulfilling her lifelong dream. Her Broadway debut arrived two years later when she replaced Julie Andrews as Guenevere in Camelot (1962). Throughout the 1960s, Kathryn frequently appeared in stage productions of musicals and operas, including La Traviata, La bohème, and Show Boat. Her performance in a 1961 production of The Merry Widow earned her a nomination for Chicago’s Sarah Siddons award.

Kathryn made regular stage, concert, and television appearances over the decades, eventually adopting a more private life as she began to travel less often. In her later years, she supervised the Voice and Choral Studies Program at Idaho State University (where students could receive the Kathryn Grayson Vocal Excellence Award) and taught voice lessons from her home in Santa Monica. Though she is not remembered for opera stardom as she hoped, Kathryn’s bright, agile voice and unmistakable charm left an enduring mark on the advent of the Hollywood movie musical.