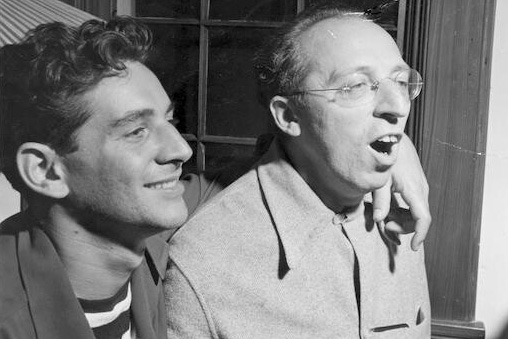 July 30 marks the International Day of Friendship, and we’re honoring the occasion by reflecting on some famous friendships between classical musicians. Who do you and your best friend most resemble?

If one of you is the “paternal friend”

…then you can definitely identify with the famous bond between Aaron Copland and Leonard Bernstein. Like any good paternal friend, Copland, who was eighteen years older than Bernstein, took Lenny under his wing, offered (sometimes too-honest) advice, and encouraged him to develop his own unique style. Bernstein showed his gratitude by giving his own critiques of Copland’s work and by championing his friend’s pieces throughout his conducting career.

The two met on Copland’s birthday in 1937—Bernstein happened to be seated next to Copland at a performance, and Copland invited the entire front row to his birthday party. Bernstein, a sophomore at Harvard at the time, played Copland’s Piano Variations impressively at the party. The friendship that resulted from this initial interaction lasted a lifetime, and the two composers died less than two months apart in the year 1990.

…you and your friend can relate to the relationship between Richard Strauss and Gustav Mahler. The two composer-conductors may have worked in the same field, but that’s about the extent of their similarities. While Mahler was egocentric and unstable, Strauss was more reserved. Mahler’s wife, Alma, once said that “They enjoyed talking to one another as they were never of one mind.”

Despite their differences, the two musicians held each other’s work in the highest regard. Mahler, for example, wanted to conduct the Austrian premiere of Strauss’ Salome in Vienna (he couldn’t get permission from the censors, and instead it premiered in Graz). And when the Nazis took control of Austria in World War II and appointed Strauss to the position of Reichmusikkammer, one of the reasons that he accepted the position (in addition to his need to protect Jewish family members) was so that he could preserve the music of banned composers like Mahler.

Mahler once wrote that he would “never cease to be thankful” to his friend “for setting things going, and in what a truly high-minded way! … Apart from the fact that my works would doubtless have earned me a reputation as a freak if Strauss’s successes had not paved the way for me, I number it among my greatest joys that I found among my contemporaries such a comrade-in-arms, such a comrade in creation.”

…then you can find common ground with Gustav Holst and Ralph Vaughan-Williams. The two composers were determined to cultivate the “English sound” within the genre of classical music, so they famously walked through the English countryside because, according to Holst’s daughter, they were “looking for folk songs.” These walks could be more than ten miles long, because of Vaughan-Williams’ size and Holst’s poor health, these adventures weren’t particularly enjoyable.

The two composers met in 1895, when they were both students at the Royal College of Music, and they ended up being huge influences on each other’s work. Vaughan-Williams would later write that “What one really learns from an Academy of College is not so much from one’s official teachers as from one’s fellow-students…. [Holst and I] discussed every subject under the sun from the lowest note of the double bassoon to the philosophy of Jude the Obscure.”

If you’ve helped each other through the hard times

…then you bear some resemblance (though hopefully with far less awkwardness) to Johannes Brahms’ relationship to Clara and Robert Schumann.

Robert helped launch Brahms’ career, and the two were close friends. But in 1854, Schumann attemped suicide and admitted himself to an asylum, where he would die two years later. During these last two years, Brahms lived with Clara and her seven children, lending her his support and comfort. Clara wasn’t allowed to visit her husband until two days before his death, so Brahms kept her informed about her husband’s condition.

Clara and Brahms found herself torn between loyalty to Robert (and the Schumann’s love story is one of the greatest in classical music) and love for each other. The extent to which they acted on their feelings is unknown, and they distanced themselves from each other after Robert’s death. Nevertheless, their friendship endured throughout the rest of their lives.

The musical careers of the Schumanns and Brahms also demonstrate their strong affection for one another. After meeting the young Brahms in 1853, Robert wrote an article praising his talent. Clara, for her part, was the first to publicly perform one of Brahms’ works (his Variations and Fugue on a Theme by Handel). Brahms, meanwhile, dedicated several pieces to Clara, including Variations on a Theme by Schumann (Op. 9), which contained the “Clara theme” written by Robert.

Listen to Brahms’ Variations on a Theme by Schumann (Op. 9), dedicated to Clara:

If you’re an unstoppable workplace duo

…then you’re a lot like Mstislav Rostropovich and Benjamin Britten. The cellist and the composer were introduced to each other by their mutual friend, Dmitri Shostakovich, after a 1960 concert in London. Britten had been utterly in awe of Rostropovich’s playing during the performance. Rostropovich, however, had almost no idea who Britten was—he thought that Britten must be a Baroque composer because of his Purcell Variations! At this famous first meeting, Rostropovich demanded that Britten write something for him. Though he apparently asked this of every composer he met, Britten actually complied, and the resulting Sonata for Cello and Piano was the first piece he had written that featured the cello.

Britten continued writing cello pieces for Rostropovich, which would become standard pieces within the cello repertoire. The two musicians also performed together (with Britten on the piano); after they had played Schubert’s Arpeggione Sonata side by side, Rostropovich couldn’t perform it with anyone else.

Listen to a recording of these two greats performing the Sonata for Cello and Piano together: