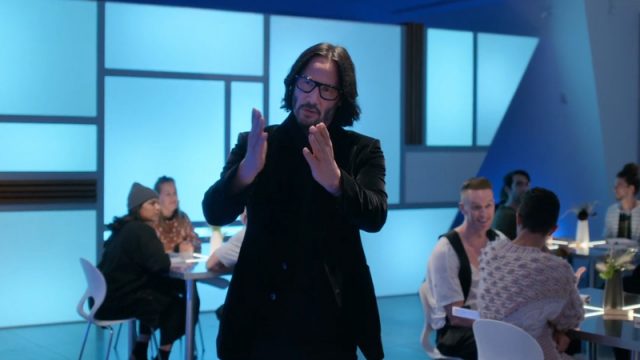 June 9, 2019WDAV BlogJust For Fun, UncategorizedComments Off on Keanu Reeves Walking In Slow-Motion To Music Is The Meme That Keeps On Giving

Music makes a difference. In your education, in your outlook, in your enjoyment of your day…all of that’s true.

But one of the places where music most noticeably makes a difference is in the movies.

Take one of the most recent Netflix films, Always Be My Maybe.  Starring and co-written by Ali Wong and Randall Park, the film explains its premise as: “Reunited after 15 years, famous chef Sasha and hometown musician Marcus feel the old sparks of attraction but struggle to adapt to each other’s worlds.”

It’s a pretty great film, led by an Asian cast. It has some of your typical rom-com moments, but one scene in particular has become quite a meme over the last week.

Since the film premiered last weekend, social media has been layering other tracks to Keanu Reeves walking and it’s the internet at its finest.

WDAV asked, what if you did a classical spin? Would a soundtrack from the 18th century work in that moment?

Yes! Of course it does! It’s Bach’s Toccata and Fugue, after all.

Now, let’s say you’re the filmmaker. You use the music to help the audience learn more about a character without having to say more. Sure, Keanu Reeves plays himself in this film. But what’s his role going to be?

Is he the knight-in-shining armor? Sasha’s prince, her infallible love interest?

Based on this version with Debussy’s Clair de Lune, you’d bet he is, right?

Now what about this one?

Ultimately, no matter how Keanu Reeves walks into a room, if his soundtrack is classical, we’re here for it.

Learn more about film music and listen to some great movie soundtracks with Reel Music with Matt Rogers at 8pm on Friday evenings.