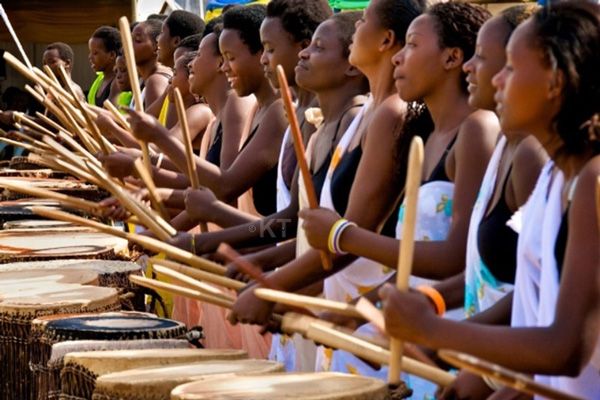 The history of Rwanda is long and convoluted, reaching much further back than the 20th-century travesties of imperial abuse and genocide. What happened in 1994 deserves clear recognition: thousands of people killed and raped hundreds of thousands of people – all of it either worsened or ignored by France, Belgium, the United Nations, and the United States. If you don’t know as much as you feel you should about those hundred days in 1994, I encourage you to watch the PBS documentary “Ghosts of Rwanda.”

Traditions have persisted beneath and in spite of the virulent developments in Rwanda’s recent past. Among these vestiges of a pre-colonial Rwanda is the art of drumming. The (male) Rwandan royal would seek out the most talented young (male) drummers, lavishing them with some of the highest favor in the royal court. This kind of prestige and social capital was left only to women’s imagination. Myriad excuses cropped up to explain away the gender disparity – women’s perceived ‘weakness’ chief among them. Gendered assumptions persisted for centuries, and many of those cling to the cultural consciousness to this day.

In the politically, socially, and culturally chaotic wake of the 1994 genocide, artistic expression lost much of its luster. As the mechanics of government and society shifted and strained, art and music became, for some, a means of personal persistence. For visual artists like Innocent Nkurunziza with the Inema Arts Center and musical artists like Kiki Katese, finding artistic release in Rwanda is not only a restorative method, but a transformative one. During an academic trip to Rwanda in the summer of 2018, I met these artists; their work is beautiful and powerful.

For Kiki, founding the first women’s drumming group in Rwandan history was a defiant act, political and personal. In 2004 Ingoma Nshya became the first drumming group to include professional female drummers and a professional female director and choreographer. When speaking with Kiki on a subdued, yellowy afternoon in late July, the word of the hour was ‘taboo.’ The notion of a female drummer, steeped in the exclusive past of the Rwandan drumming tradition, was utter anathema in past decades. Instead of hostility, however, Kiki and her drummers were met with something more biting – ridicule.

Despite their initially strained reception, Ingoma Nshya has come to enjoy national and international renown. To add to their mission of empowering women through the arts, the group has started an ice cream business, partnering with a Brooklyn company to give Rwandan women greater economic mobility.

Kiki and Ingoma Nshya are just one example of the tangible power of music education as a means of personal expression and empowerment. Music ought to permeate borders and barriers; musicians like Kiki and the drummers of Ingoma Nshya do just that.

—
Ross Hickman is a first-year student at Davidson College, who’s deeply interested in film music and works at WDAV.