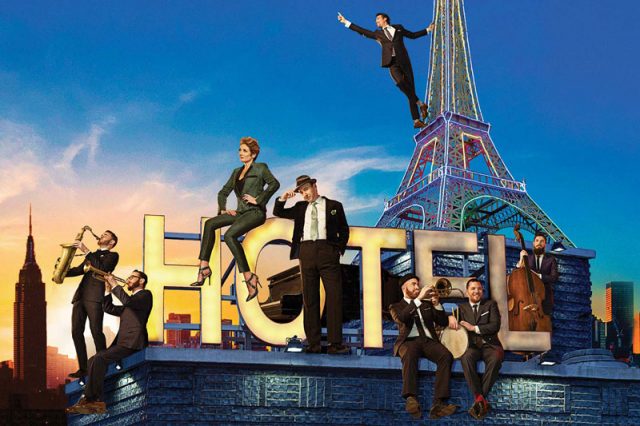 The Hot Sardines are a contemporary jazz band, paying a visit to Davidson College’s Duke Family Performance Hall in February. Drawing on rich traditions of jazz from the swinging stages of New York, Paris, and New Orleans, the classically trained Hot Sardines put fresh twists on old standards like “Comes Love” and “It Had to Be You.” Other songs like “Here You Are Again” and “Gramercy Sunset” are the product of the band itself, combining the musical force of lead singer Elizabeth Bougerol and bandleader Evan Palazzo. Bougerol, a native speaker, often croons in French, with songs like “Petite Fleur” and “La Fille Aux Cheveux Roux.”

We asked Elizabeth a few questions about their innovative work:

Would you consider your work a revival or an expansion of the jazz tradition?

Anyone who’s ever covered a jazz song is doing both, even if they don’t acknowledge it as such — you don’t have to throw out everything that’s come before to create something new.

With which older jazz artists do you most identify?

Do you think there is an essential crossover between the American and French jazz scenes?

They’re fused at the root. You can’t talk about New Orleans jazz without talking about the 19th-century European music French settlers brought with them, and the ways these sounds blended with African rhythms and spirituals and the blues to create the beginnings of dixieland. And later on, without the French, we might never have heard of Sidney Bechet or Josephine Baker, who found a more appreciative audience and a much richer creative environment in France, and in turn, gypsy jazz like Django Reinhardt’s Quintette of the Hot Club of France influenced the American jazz scene, with lasting effects to both countries’ musical landscapes.

Do you hope to inspire future generations to carry on the jazz tradition?

This is music that connects people — and the next generation instinctively gets that. We can only hope that some notes we play might connect with a budding musical mind, because we can’t wait to see what they’ll do with these 80- and 100-year-old songs.

Traveling across the country and the world, the Hot Sardines will stop by Davidson on February 12th in the Duke Family Performance Hall. For more information, click here.