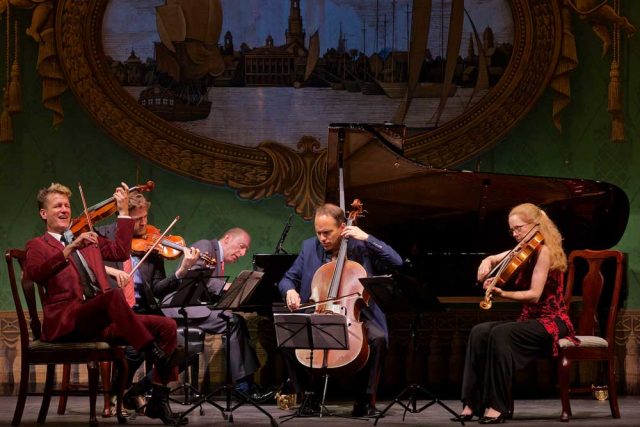 Pictured: Geoff Nuttall (far left), the Director of the Bank of America Chamber Music series, with members of the St. Lawrence String Quartet and pianist Pedja Muzijevic at the Dock Street Theatre. Photo by William Struhs.

Geoff Nuttall, host of every chamber music concert at Spoleto Festival USA, was about to begin the downstroke of a Mozart piano concerto adapted for sextet. Suddenly, upon a sign from another member of the St. Lawrence String Quartet, the first violinist turned to the audience.

“There’s a secret signal we use – I’m not going to tell you what it is – to let me know…my fly is open,” Nuttall informed the Dock Street Theatre crowd. Hiding his indiscretion behind his instrument, he fiddled with his trousers. Somewhere, the ghost of Mozart giggled. Then pianist Pedja Muzijevic, double-bassist Doug Balliett and the quartet galloped happily into the reduction of Piano Concerto No. 12.

That’s the reason seeing music live makes a delightful difference. Recordings and broadcasts can’t capture the excitement, humor and full educational value of a live concert. (Who but violists knew that violas carry so much emotional weight in the string orchestra version of Barber’s “Adagio”?)

Here are six more reasons, all made palpable in the second and third of 11 concerts in the Bank of America Chamber Music Series, which runs through the last day of Spoleto on June 10.

1) Countertenor Anthony Roth Costanzo, perhaps the most-anticipated of the fine guest artists on opening weekend, broke your heart one day with a Handel aria from “Amadigi di Gaula.” The next day, aiming for hipster credibility with the Peggy Lee song “Fever,” he tried in vain to flick a lighter open and set a “cigarette” aflame in the break between verses. Even he laughed. (He eventually succeeded.)

2) Charles Wadsworth, now 89 and creator of the chamber music program at Spoleto USA, missed only his second festival in 42 years. Nuttall, who took over for him nine years ago, asked the crowd to holler “We miss you, Charles!” We did, and wife Susan Wadsworth recorded us on her cell phone. After that tender moment, Nuttall and Costanzo segued into a conversation about the 17th-century process for creating castrati and the unresonant noise Costanzo would make if he had vocal chords but no head: “It would sound like a kazoo.”

3) The St. Lawrence played a relatively early Haydn quartet, the sixth and last of the Op. 20 set, with such passionate affection that the room rocked and strings came loose from their bows. Nuttall, who all but idolizes Haydn, preceded it with a mini-lecture on the revolutionary use of folk music and democratization in the string quartet, where each instrument got a chance to shine. You could see this music pointing the way for Mozart, Beethoven and their descendants.

4) The St. Lawrence Quartet and the JACK Quartet (named for the first initials of its original members) lined up at opposite sides of the stage for a 16th-century rarity by Giovanni Valentini. With Balliett accompanying both quartets as “referee,” this “Enharmonic” Sonata turned into a battle of the bands, and variations bounced back and forth. The visual element added suspense. Who can guess the last time any American – perhaps anyone at all – heard this music?

5) Balliett, this year’s composer in residence, debuted “Gawain’s Journey.” The music was lush, angry, sweet and melancholic, always in conjunction with supertitles telling a chunk of the British legend in which Gawain battles the Green Knight. Someone hearing a broadcast at home would wonder why the crowd laughed. The answer? A title reading, “He had no one to talk to but God…and his horse.” The work dealt with Gawain’s bloody, violent, footslogging attempt to reach the castle of the Green Knight, without knowing if he ever would – Arthurian chivalry meets “Waiting for Godot.”

6) In Pauline Oliveros’ mystical “Horse Sings From Cloud,” the JACK quartet spread out around the hall. They and selected members of the audience activated xylophone-like cell-phone apps that played tones of various pitches, volumes and durations. That created a contemplative atmosphere and made the wood and cloth of the theater part of the piece. Was this really “music?” A discussion for another time, perhaps – but it was worth hearing, either way. And you had to be there in person to appreciate it.

Plus, read more dispatches from this year’s festival.
Tweet