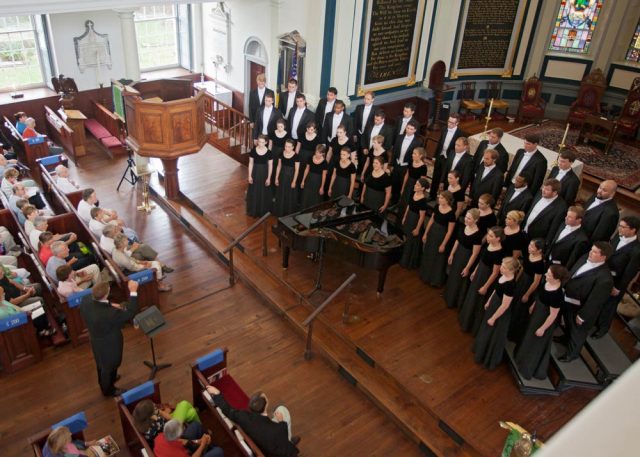 There are few settings in Charleston more idyllic for a concert than the Cathedral Church of St. Luke and St. Paul. Watching the late afternoon light as it slants through the windows on the west side of the sanctuary, with the stained glass behind the altar providing a dramatic backdrop to the Westminster Choir in their evening attire, you feel like you’re in for a special experience, and indeed, you are.

The Westminster Choir has been the Choir in Residence at the Spoleto Festival USA in Charleston for many years, since the days when the ensemble was led by the legendary Joseph Flummerfelt. Upon Flummerfelt’s retirement, Joe Miller assumed the role, and he continues the tradition of presenting sublime a cappella concerts in that special hour before a late spring evening gets underway. Miller has distinguished himself by programming especially thoughtful and inventive choral performances, and the concert I attended on Memorial Day is a perfect example of his approach. Contemporary settings of sacred texts in Latin formed the bookends of the first part of the concert. “Lux surgit aurea” – “See the golden sun arise” – by Bernat Vivancos harkens back to medieval chant and Renaissance polyphony at the opening and close, but in the middle enters an ethereal, contemporary realm. On the far side of the concert program, “Laudibus in Sanctis” – “Celebrate the Lord Most High” – by Ugis Praulins had dramatic shifts in mood propelled by driving rhythms reminiscent of Carl Orff.

In between there was an Abendstandschen, or Evensong, by Johannes Brahms that featured his characteristically rich choral writing, and a setting by Kile Smith of the words of the Apollo 8 astronauts on Christmas Eve of 1968 which was made otherworldly by the use of hand bells and the resonant droning of high soprano voices. 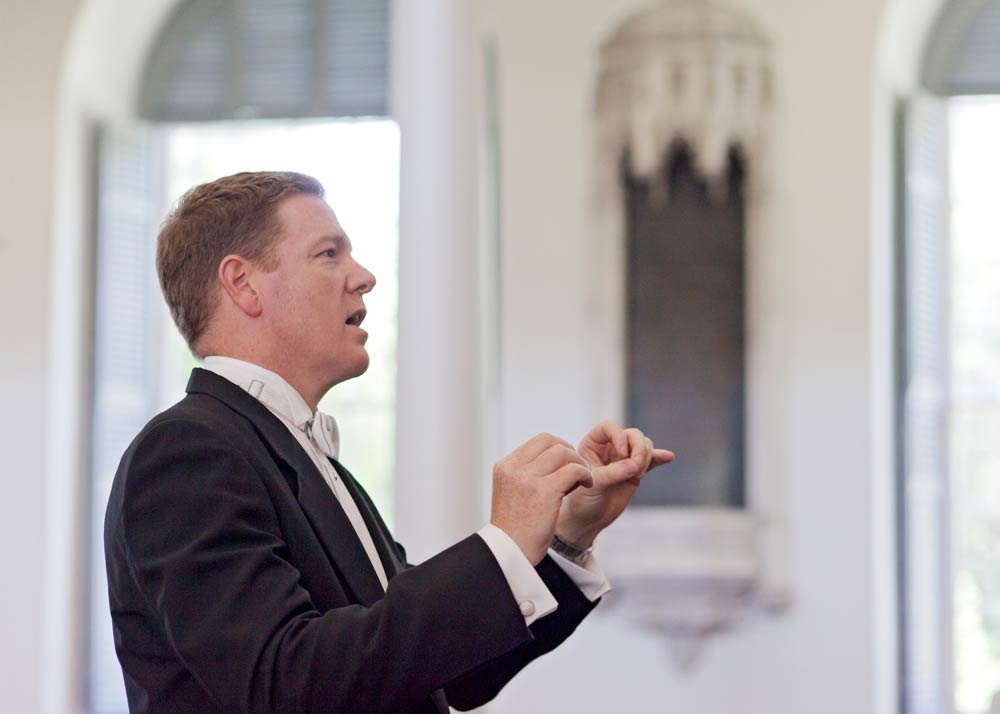 There was also an infectious pair of folk hymns, sung in the distinctive, American 18th century shape note style of singing. These were sung by a subset of the choir separating from the group and assembling in the crossing between the transepts of the cathedral; and a stirring spiritual, “Yonder Come Day,” with alto soloists Taria Mitchell and Pauline Taumalolo, as well as percussion provided by choir members using a tambourine and a broom handle. Paul Crabtree’s “Death and Resurrection” brought us back to the present day. It concludes with a haunting Shaker text: “Do all your work as though you had a thousand years to live/And as you would if you knew you must die tomorrow.”

The second part of the program consisted of the American folk tunes in choral arrangements that have become a signature of the Westminster Choir, including the nostalgic “Shenandoah.” I have never been to concert by this choir at the festival that hasn’t received a standing ovation at the end, and this one was no exception. In exchange, we were rewarded with two encores, one of them an apt and exquisite setting of the standard, “I’ll Be Seeing You.” The choir repeats the program on Saturday, June 3rd. Playwright Samuel Beckett’s absurdist masterpiece Waiting for Godot has attracted legendary performers, from familiar movie character actors Tom Ewell and Burt Lahr in the first U.S. production, to comic icons Steve Martin and the late Robin Williams, and more recently distinguished knighted thespians Patrick Stewart and Ian McKellan. No doubt the attraction for performers is the challenge of keeping an audience engaged over two and a half hours of theater where the meaning can be elusive, though the rewards are plentiful. By turns bawdy and poetic, and frequently hilarious, in one sense the play isn’t all that mystifying when taken at face value as a rumination on existence.

The cast of this production from Ireland’s Druid Theater is more than up to the challenge. In their tattered costumes, and with their distinct physical types, they have some of the pathos of silent film comedians, but with their broad physical humor, exaggerated stances, heightened gestures and manic expressions, they seem like Warner Brothers cartoon characters come to life. The team of director Garry Hynes and designer Francis O’Connnor, who worked such magic with the Festival production of the Vivaldi opera Farnace, deliver another visually rich experience with this play. To borrow a recurring bit of dialogue between Vladimir and Estragon: “Is this a good thing?” “It will pass the time.” To which I would add, “It will pass it very well.”

Waiting for Godot has numerous performances through the end of the festival at the Dock Street Theatre. Check the schedule at spoletousa.org for show dates and times.