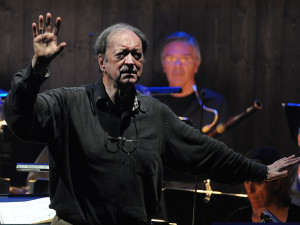 The late conductor Nikolaus Harnoncourt, rehearsing in Salzburg, Austria in 2012.

Widely influential conductor and early-music specialist Nikolaus Harnoncourt has died at age 86 in the Austrian village of St. Georgen im Attergau, near Salzburg.

His wife, Alice Harnoncourt, announced his death on his website; the cause of death was not disclosed. Harnoncourt had announced his retirement Dec. 5 — the day before his 86th birthday — in a handwritten letter published on his website and included in the program book of the Vienna Musikverein concert hall, where he appeared frequently.

Harnoncourt was born in 1929 in Berlin into a wealthy, aristocratic family. His full name was Count Nikolaus de la Fontaine und d’Harnoncourt-Unverzagt; his father was an Austrian count and his maternal great-grandfather was a Habsburg archduke. From the time Harnoncourt was a toddler, his family lived in the Meran Palace in Graz, Austria. With the Nazi annexation of the country, the family’s security grew more precarious, and in 1944 they moved to the Salzkammergut area, where the young Harnoncourt began playing cello. By 1948, he moved to Vienna to study cello more seriously. It was there, at the Vienna Music Academy, that Harnoncourt founded his first early music ensemble — the Vienna Viola da Gamba Quartet, which included his wife-to-be, Alice Hoffelner.

Harnoncourt did not graduate from the conservatory. Instead, in 1952, he left shortly before his final exams to accept a position playing in the Vienna Symphony Orchestra under Herbert von Karajan, remaining until 1969.

Alongside Harnoncourt’s work with this mainstream orchestra, his interest in pre-Baroque music increased. In 1954, he and his wife formed a group to perform the first notable opera ever written, Monteverdi‘s L’Orfeo. (That performance was conducted by composer Paul Hindemith, another artist fascinated by early music.) By 1957, their ensemble had a name: the Concentus Musicus Wien. With that group’s founding, Harnoncourt became one of the fathers of the early music movement, which sought to bring pre-Baroque and Baroque compositions back into regular performance, played in ways they might have been heard when they were new.

In an essay on Harnoncourt’s website, his interest in early music is presented as the direct inverse of the aesthetics and perhaps even cultural politics of artists like Karajan:

His 1982 book Musik als Klangrede (Music as Speech) was the first to comprehensively describe the theory of historically informed performance practice. He emphasises again and again that when making music every idea must develop from original sources. He demands that his musicians be ready to discuss, that they ask questions; indeed, he expects objections. This is what automatically makes him the antithesis of the traditional conductor who never justifies his decisions to the “lower orchestra musicians,” but rather enforces his will autocratically. The figurehead of this stance is Herbert von Karajan, whose “kingdom,” the Salzburg Festival, was the epitome of established society events in the eighties, and which celebrated art as a kind of High Mass for the financially elite.

There was a similar motivation at work in Harnoncourt’s decision to evolve from his work as a cellist to his calling as a conductor, as he told NPR’s Performance Today in 2006. Speaking of his years playing in the Vienna Symphony, he said, “I played with all the great conductors, I played the whole classical repertoire and practically everything which was newly composed in that time.”

“But in the last years of that time,” he continued, “we had to play the last symphonies of Mozart very, very often, especially the G minor Symphony (No. 40), which is a very tragic and at the same time consoling piece. And when this piece was played, the audience started to smile, and to wave their heads. It was a familiar situation — which I hated, I must say. And when I saw them all starting to smile for this music which speaks of death, I was absolutely sure that we were doing everything wrong by performing this symphony. And there was one day when I said, ‘I don’t want ever to play that again in that way.’ And the next morning, I went to the director and said, ‘I will quit the orchestra; I have to do it myself.’ It wasn’t easy, because I was a young man with four children, and I had nothing in view — and nobody taught me to conduct.”

By the early 1970s, Harnoncourt was conducting performances of Monteverdi’s operas at venues like the Piccola Scala in Milan; in 1975, he presented the first staged cycles of Monteverdi’s three extant operas at the Zurich Opera House. It was also during this time he began a landmark project with his collaborator Gustav Leonhardt: recording all of J.S. Bach‘s known sacred cantatas, about 200 of them, in historically informed performances that featured lean groups of musicians and singers and boy soloists. It was an undertaking that required enormous scholarship as well as immense effort, resulting in 45 double-LP albums recorded over nearly 20 years.

As Harnoncourt’s reputation for early music continued to grow, he was encouraged to reach into material beyond the Baroque. In 1980, the Zurich Opera House hired him to stage all of Mozart’s operas. As time went on, Harnoncourt began to explore larger and larger swaths of the repertoire, from works of Beethoven to music by Dvořák, Bartók and Alban Berg. As a conductor, Harnoncourt was particularly interested in creating highly detailed and often astringently bracing performances — the same qualities he had brought to his work with Bach and Mozart.

Harnoncourt’s recording of a certain 20th-century opera seemed to come out of left field, at least until one heard the story of the conductor’s longtime connection to it. When he was still a child, his New York-based uncle, René d’Harnoncourt (who was director of the Museum of Modern Art from 1949 to 1968), sent his family a vocal score of an opera written by a friend of his. It was George Gershwin‘s Porgy and Bess.