Handel’s Music for the Royal Fireworks has a history almost as loud as its namesake. The work’s premiere is a story of disagreements, bonfires, and… a lot of traffic.

The Royal Fireworks suite was commissioned by King George II in 1749 to mark the end of the War of the Austrian Succession, an eight-year territorial dispute involving most of the European powers. His Majesty wanted to celebrate the treaty signing with an event of grand proportions. A 400-foot wooden pavilion was constructed for the occasion in London’s Green Park. George’s Comptroller of his Majesty’s Fireworks for War as for Triumph – I kid you not – organized a fireworks display involving nearly 10,000 rockets and 101 cannons. But what good are elaborate pyrotechnics without the right music? 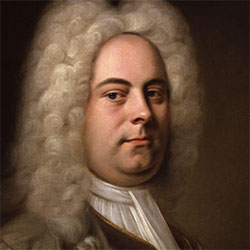 Much to the composer’s chagrin, Handel was given guidelines for the piece that would accompany the king’s beloved fireworks: not overly long, heavy on the military instruments (i.e. brass, woodwinds, and percussion), and ‘no fiddles.’ Handel was a bit irritated by that last request. He would later rescore the Royal Fireworks suite for a full orchestra, which is the version we hear most often today.

At its premiere, however, the composition did not include strings. The piece was written for 9 trumpets, 9 horns, 12 bassoons, 24 oboes, three pairs of kettle drums, and a handful of side drums.

Six days before the big celebration, 12,000 people crowded streets, roofs, and boats to hear the piece performed at the dress rehearsal. Afterwards, the audience dispersed in mass. To make matters worse, the London Bridge had fallen down – the central arch of the new structure had collapsed – so the main road was blocked. The resulting chaos caused a three-hour traffic jam of carriages!

In the end, that dress rehearsal turned out to be significantly more successful than the concert itself. On the night of the big event, despite the incredible music, the fireworks failed to wow the crowd. Rockets misfired or refused to light at all. The display was said to be “pitiful and ill-conducted, with no changes of coloured fires and shapes: the illumination…lighted so slowly that scarce anybody had patience to wait the finishing.”

However, the evening did end with a dazzling display. A stray rocket caught the wooden pavilion on fire, and most of it burned to the ground. Oops. Something tells me Mister Comptroller of his Majesty’s Fireworks was out of a job the next day.