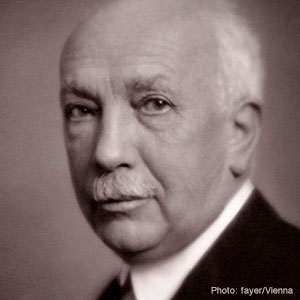 Born in Munich in 1864, Richard Strauss is a leading composer of the late Romantic and early modern eras. Many saw Strauss as the successor to Richard Wagner, and he became known for his advanced harmonic style. He met Alexander Ritter during his early professional years and was encouraged to abandon classical forms. As a result of this relationship, Strauss began to compose symphonic poems. The wide acceptance of his Don Juan (1889) started his ascendance to the musical elite.

Strauss’s first operatic success came in 1905 when he debuted Salome, which was based on Oscar Wilde’s play of the same title. His other opera’s include Elektra (1909), Der Rosenkavalier (1911), and Arabella (1929). After his experimentation with symphonic poems and opera, the remaining years of his life were spent perfecting his craft in relative isolation. He composed some rather interesting symphonies as well. One in particular — Symphonia Domesticai (1903) — describes twenty-four hours within the Strauss family household. He maintained an unparalleled ability to describe and to show psychological detail.

During his life, Strauss witnessed two world wars and remained uninterested in politics. While Wagner remained a Nazi party favorite throughout his life, Strauss occupied the opposite end of the spectrum: the Nazi regime disliked his association with the Jewish librettist, Stefan Zweig. After the two worked on Die schweigsame Frau (The Silent Woman, 1935), the opera became banned. Shortly after this event, the composer received continued threats from the regime due to his daughter-in-law’s Jewish heritage. Known as a family man, Strauss took is family and lived in Vienna during World War II. He likely used his power as the most famous German composer alive to protect his family from the Nazi regime. He only moved back to Germany after the war when his name was cleared (Learn more about his life). Among the most memorable composers to come out of Germany, Richard Strauss maintained an interesting life and created music to match.