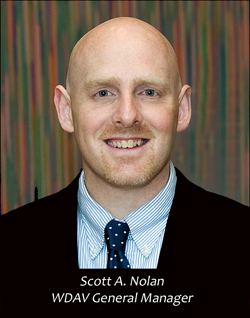 POSTED July 28, 2011 – Davidson College today announced the hire of Scott A. Nolan as general manager of WDAV 89.9 Classical Public Radio, effective August 29, 2011. Nolan comes to WDAV from his current position as director of development at the Columbia Museum of Art in Columbia, SC. He previously served for six years in development at WUSF Public Broadcasting, a joint licensee (public TV and radio) at the University of South Florida in Tampa. Nolan becomes the station’s fifth general manager in its 32-year history.

“Scott brings strength in so many of the key areas WDAV seeks,” said Cat Serrin Niekro, Associate Vice President for Constituent Relations at Davidson College. “He is adept at strategic planning and building partnerships throughout the community. At WUSF, he had exceptional success building financial resources for the station. His open, collaborative management style makes him a great fit with the WDAV team, and I am confident he will lead the station in achieving its ambitious goals.”

“WDAV is an outstanding public radio station with a smart and talented staff – what an honor to be invited to join the team,” said Nolan. “Since my days at WUSF, I’ve watched WDAV become one of America’s great classical music stations, and I look forward to helping build the resources to assure WDAV’s continued success.”

Nolan earned Bachelor of Arts with Honors degrees in Business Management and History from Eckerd College in St. Petersburg, Florida, and a Masters degree in History from American University in Washington, DC. He has been a presenter at various public radio conferences, including the Public Media Development and Marketing Conference (PMDMC) and the Public Broadcasting Management Association (PBMA). Nolan has been active in Columbia’s Capital Rotary Club since 2008 and will continue his involvement as a Rotarian when he relocates to the Charlotte region with his wife Amy and their two young children.

About WDAV Classical Public Radio
WDAV is one of America’s leading producers of original classical-music programming. In addition to producing 140 hours per week for its own broadcast use on its HD-1, HD-2, and wdav.org channels, the station produces nationally-distributed programs, including NPR World of Opera, Concierto, SummerStages, and, in partnership with ETV Radio of South Carolina, Carolina Live. A service of Davidson College in Davidson, NC, WDAV’s 89.9FM signal reaches a 22-county region centered in the Charlotte, NC metro area and ranging from Rock Hill, SC to Galax, VA. WDAV’s broadcasts can be heard live online 24 hours a day at wdav.org and iTunes, as well as on any iPhone or iPad equipped with the “Tuned In,” “NPR Music” or “Public Radio Player” app.

About Davidson College
Davidson is a highly selective independent liberal arts college for 1,900 students located 20 minutes north of Charlotte in Davidson, N.C. Since its establishment in 1837 by Presbyterians, the college has graduated 23 Rhodes Scholars and is consistently regarded as one of the top liberal arts colleges in the country. Through The Davidson Trust, the college became the first liberal arts institution in the nation to replace loans with grants in all financial aid packages, giving all students the opportunity to graduate debt-free. Davidson competes in NCAA athletics at the Division I level, and a longstanding Honor Code is central to student life at the college.