This just in from our friends at the Union Symphony Orchestra in Monroe, NC:

POSTED July 13, 2011 – The Union Symphony Board of Directors has named Richard Rosenberg as its new Artistic Director. Rosenberg is one of a handful of American conductors whose experience ranges from contemporary music to historical performance practice. Mr. Rosenberg has recently released editions of music by the 19th-century Louisiana composers Edmond Dédé, Louis Moreau Gottschalk and Lucién Lambert, as well as music by Jerome Moross, on the Naxos/Marco Polo label. His Naxos recording of jazz-inspired concerti, including music by George Gershwin, James Price Johnson, Harry Reser and Dana Suesse, was released online in March 2010 and on compact disc in February 2011. 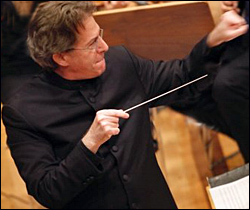 Mr. Rosenberg’s numerous orchestrations and his corrected editions of J.S. Bach’s “Saint Matthew Passion,” George Gershwin’s “A Rhapsody in Blue,” Arnold Schönberg’s “Verklärte Nacht” and the complete orchestral music of Gottschalk have received numerous performances. In addition to his work as a conductor, Mr. Rosenberg has produced two compact discs of music with jazz legend Dave Brubeck, and two discs of Mozart piano concerti, all for the Naxos Records label.

As a guest conductor, Mr. Rosenberg has performed with the Rochester Philharmonic, the Kennedy Center Opera Orchestra, Miami City Ballet, and symphony orchestras and ballet companies throughout the United States, Europe and South America. His upcoming engagements include concerts with the The Festival Música nas Montanhas and the Vancouver Island Symphony. Mr. Rosenberg’s teachers include Leonard Bernstein, Herbert von Karajan and Sir Roger Norrington.

Union Symphony Orchestra of Monroe, NC is a professional organization of contract musicians that performs at The Batte Center on the campus of Wingate University.  For information on auditions, Maestro Rosenberg, or the 2011-2012 season of events, visit Union Symphony online at www.unionsymphony.org.