Notes, News and Views from Day One of WDAV”s Celebration 2008 Fall Fundraiser:

So, just who is listening to WDAV at 5 o”clock in the morning? For one month now, Mike McKay has been waking the WDAV faithful an hour earlier, with the Classic Commute kicking off at 5 am, as part of Classical Public Radio”s for our 30th anniversary season.
So we thought we”d brew up a little reward for the early-morning risers (or late-night-go-to-bedders!) with the launch of the WDAV Breakfast Club….a special incentive for any listeners who called in or made an online pledge before 6 am: Not only a WDAV coffee mug (hey, we”re a public radio station, after all!), but also a whole bag of coffee beans from Summit Coffee in Davidson. And whadya know? Turns out there are plenty of listeners, from near and far, online and over the air, who are now charter members. Including one new member in the Smoky Mountains gateway town of Otto, NC, some 200 miles away from the WDAV transmitter!

Speaking of distances, since WDAV”s all-classical stream went up on iTunes last July, our online listening has jumped about 40%. So Jennifer Foster and Rachel Stewart got to shouting out for some “long-distance dedications” to “DAV. The Day One winner: Kissimee, Florida.…
What made the phones ring….

The spectacular 12-man choral group from San Francisco is celebrating its 30th anniversary this year; so is WDAV. So we were spreading a little Chanticleer holiday cheer on the airwaves….and no one seemed to mind a bit.

Maybe it”s because a lot of us could stand a little cheering up right now, what with the long gas lines her in NC, and the cascade of shocking news from Wall Street. And here we are at WDAV asking a lot of shell-shocked listeners for a little support to keep our airwaves humming and online signal a-streaming. What”s the value of Classical Public Radio in times like this? Well, we”re about to find out. The results from Day One were encouraging (following our progress on the wdav.org home page), but we have a long way to go.
And, of course….if YOU want to lend your support, click here….or give us a call at 877-333-8990. Switchboards, as they say, are now open! Now, back to the blur…. 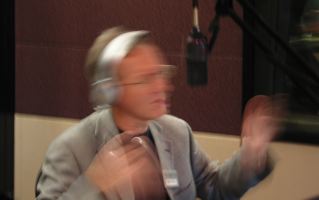 One thought on “Scenes from a Fund Drive: Bags of Beans, The Devil's Trill, and Hot Chanticleer”