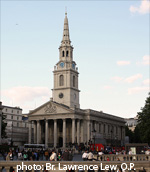 So anyway I told the visitors what I had frankly only learned after already being a classical announcer: that “academy” was used occasionally in the 18th century to mean orchestra, and that this particular orchestra used it because it originally specialized in 18th century music. And it was founded at the London church of St. Martin-in-the-Fields. Hence the name.
They were delighted to know and went on their way. But I got to thinking: how many other “mystifying” ensemble names, composition titles and musical terms are there that we radio pros throw around carelessly, but which listeners might well have questions about? So I started a list of some possibilities:

What about you? Is there a classical term, title or ensemble that you wanted to know about, but were afraid to ask? This blog is the perfect place, and no one need be ashamed.
We look forward to hearing from you.
(Image by Br. Lawrence Lew, O.D. used through the Creative Commons license.)

3 thoughts on “The Mysterious Barricades in Classical Music”