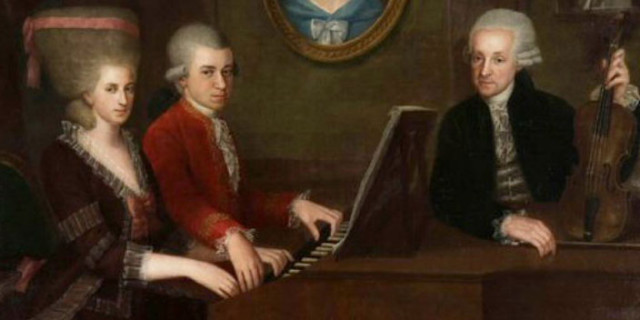 Johannes Chrysostomus Wolfgangus Theophilius Mozart, known as Wolfgang Amadeus Mozart — or Wolfie for short — was born in Salzburg, Austria on January 27, 1756. The child of violinist and composer Leopold Mozart, Wolfgang showed an affinity for music from a very early age. He had an innate sense for chords, tempo, and rhythm, which encouraged Leopold to start piano lessons with the then three year old. Mozart learned to play the violin at age four. By five, he had composed his first piece – a piano minuet. At six years old, the child prodigy – along with his father and sister, also a talented pianist – was traveling Europe to perform for royalty. 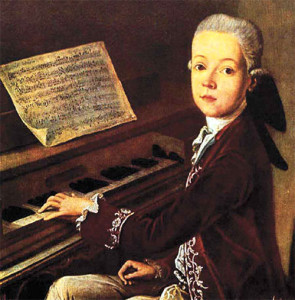 When he wasn’t performing, little Wolfie caused his fair share of trouble. Mozart had an illustrious personality. He was precocious, craved attention, and loved bathroom humor. Anecdotes describe Wolfgang as immature, brash, and excitable. Even getting his haircut was a challenge. His barber could never get the musical genius to sit still. Mozart would think of a new idea and rush to the piano, with the barber brandishing scissors behind him.

As Mozart’s musical career progressed, he quickly outgrew the opportunities available to him in Salzburg. With his mother as traveling companion, he traversed Europe in search of a high-status court position. This trip was a particularly dark time in Mozart’s life. His job hunt was unsuccessful. A young singer named Aloysia Webber stole the composer’s heart, but did not return Mozart’s love. And in 1778, Mozart’s mother became sick and passed away. He returned to Salzburg broken-hearted and jobless. Eventually, Mozart packed his things and headed for Vienna, becoming one of the first-known freelance musicians.

Life in Vienna suited Mozart well. He fell in love with a different Webber sister and married Constanze in 1782, much to the chagrin of his father. He was highly successful as a pianist and composer, allowing the family to live an extravagant lifestyle filled with fancy apartments, expensive pianos, and ample servants. Wolfgang even befriended the famed Joseph Haydn, who sang Mozart’s praises: “Before God and as an honest man I tell you that [Mozart] is the greatest composer known to me either in person or by name.” Haydn would become a strong influence on Mozart’s work.

Sadly, Mozart’s lavish lifestyle and lack of savings caught up with him. Due to the ongoing Austro-Turkish war, the Aristocracy had limited money to support the arts, which left Mozart without work. Compounding debt forced the family to move to inexpensive housing and borrow funds from friends and colleagues.

In the last year of Mozart’s life, the future looked bright. His opera The Magic Flute had seen astounding success, which enabled him to repay his debts. But while in Prague for the premiere of La Clemenza di Tito, he fell ill. Two months later, the sickness had him bedridden. Although his health was quickly deteriorating, Mozart remained mentally engaged in writing his Requiem until his final days.

Mozart died on December 5th, 1791 at 1 a.m. The cause of his death – officially listed as “severe military fever” – is a highly debated topic. The nearly 120 hypotheses include everything from strep throat and flu to vitamin D deficiency and poison. The beloved composer was buried in a common grave.