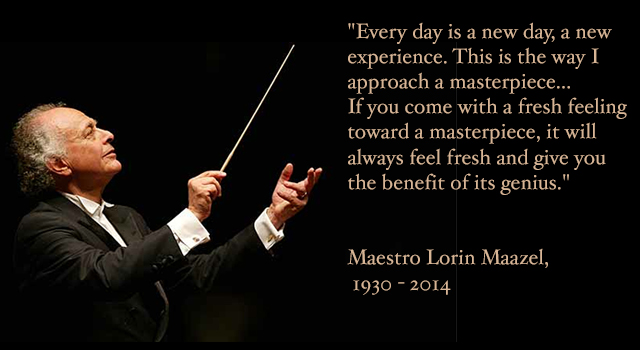 WDAV honors the life and career of Maestro Lorin Maazel, the renowned conductor who passed away Sunday, June 13, 2014, at his home in Virginia.

Maazel boasted a résumé and a mind like few others: music director of the New York Philharmonic, the Vienna State Opera, the Cleveland Orchestra, and the Munich Philharmonic, among others; fluent in English, Italian, French, German, Portuguese, and Spanish; and, with his wife Dietlinde Turban Maazel, the founder of the Castleton Festival, established to train and inspire young musicians. Just two weeks ago, Maazel appeared at the festival’s opening night, calling his work there “more than a labor of love – a labor of joy,” according to the festival website.

Joe Robinson, the Principal Oboist of the New York Philharmonic (1978-2005) and a friend of WDAV, shared his memories with us of his years working with this esteemed conductor:

“Lorin Maazel was the ultimate virtuoso conductor.  He possessed an extraordinary combination of musical and athletic gifts—perfect pitch; the vocal range of Bobby McFerrin; an infallible photographic memory; and the kinesthetic genius of a great dancer. I never saw him make a mistake on the podium.  He was a prodigy who gave the impression throughout his career that conducting was child’s play.

If you’d like to learn more about the life and work of Lorin Maazel, read his obituary by The Castleton Festival. To celebrate the work of Maestro Lorin Maazel, enjoy this 2012 performance of Mozart’s Symphony 41:

by James Hogan
Soon this January we’ll be inaugurating a new president, which got me thinking about democracy and classical music. Whacky, I know.
The New York Times ran an article in December about Gilbert E. Kaplan, a very well-to-do businessman and patron of the arts who has developed an acute passion for Gustav Mahler’s Symphony No. 2 (“Resurrection”). He has had the fortune of conducting the piece with over 50 orchestras around the world, but his most recent performance, a December 8 concert with the New York Philharmonic, was subjected to harsh criticism by some of the Philharmonic’s very own members.