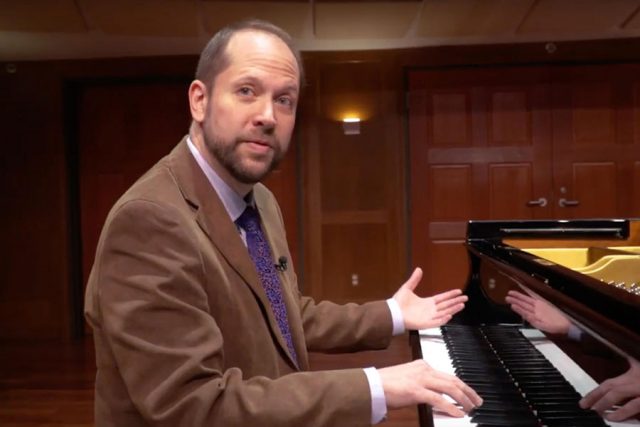 By Jay Pfeifer
This article originally appeared on Davidson.edu on December 18, 2019.

Lerner, music professor and chair of the music department, has been teaching classes about music and cinema for more than 20 years—and every class covers the scores of John Williams, the composer who has defined the sound of movies for more than 40 years.

Williams is best-known for the scores he wrote for all nine “Star Wars” films. The upcoming release of “The Rise of Skywalker” marks the end of a four-decade engagement between Williams and the Skywalker saga.

In addition to the opening theme, Williams’s “Star Wars” scores are renowned for his skillful use of motifs, using music to convey the hope in Luke Skywalker’s journey or the lurking menace of Darth Vader. In fact, Lerner thinks he noticed a connection between two motifs that might hint at ties between Rey, the young star of the new “Star Wars” trilogy, and the sinister Emperor.

Of course, Williams also wrote dozens of other notable scores, including for the films “Jaws,” “Indiana Jones,” “Close Encounters of the Third Kind” and “Schindler’s List”—to name a few.

Lerner shared some of his insight on Williams’ music and his place in the classical-music canon below.

What is John Williams’s place in classical music?

At the moment, he’s regarded chiefly as a film composer. And in the world of classical music, film scores are starting to get a little more recognition, but film music is still not seen as important as operas or symphonies or chamber music. I think as more time passes, that’s going to shift.

Is that because film is still a relatively young medium?

That’s right. Film scoring really didn’t start until the late 1920s or early 1930s, when we have the beginning of synchronized sound film. Also, film music is commercial entertainment. There’s no denying that. Yet some films can be really rich, complicated and interesting texts.

I predict that Williams’s music is going to be considered some of the most important and interesting music composed in the 20th and 21st century. And in the same way that listeners and scholars and performers can now go back and enjoy the symphonies of Beethoven or Haydn, or the cantatas of Johann Sebastian Bach, or the polyphonic masses of Josquin des Prez, they will go back to study and listen to the film scores of John Williams.

They’re masterfully put together. There is an imaginative, creative musical mind behind them; he’s a composer who is brilliant with the symphony orchestra. We now have digital sampling and the ability to create any sound we can imagine, but in the 18th and 19th century, the orchestra was the pinnacle of musical instruments. It’s a dying art in several ways. And Williams is, I think, one of the last great practitioners of that, the culmination of a symphonic tradition, and also in many ways the sunset of it as well.

Though “Star Wars” is his most famous work, he has scored for dozens of films that sound very different. Is his range what makes him so great?

That’s part of it but, to my mind, what makes him so important is his imagination for memorable melodies and his choices of orchestration—that is, how to make an orchestra sound sometimes incredibly huge and powerful and imposing, or how to make it other times sound incredibly delicate and intimate, and to know just when to use these different effects.

By the time “Star Wars” came out in 1977, Williams had already won two Oscars. He was an accomplished, successful composer. How did “Star Wars” change John Williams?

Star Wars” is regarded by many as a renaissance of the symphonic film score, but the success of “Star Wars” was part of the new Hollywood that was defined by cross-marketing. The music promotes the film, the film promotes the music.

And in the “Star Wars” score, you’ve got stylistic connections to many composers. There’s a strong tie back to Erich Wolfgang Korngold, a composer who was an important composer of action scores in the 1930s and 1940s for the Errol Flynn swashbucklers. Korngold’s sound was part of what Williams was aiming for in “Star Wars.”

With Williams, you’ve this strange fluke that he would go on to compose music for “Star Wars” films for more than 40 years. What do you see in the long thread of all the “Star Wars” music?

We’re still seeing it all happen in real time, so as a historian I want to have time to let the dust settle. But he’s changed and developed as a composer at each of these stages. The prequel scores sound different from the first three. And in the same way, these last three scores, to me, sound more autumnal in style. Instead of pulling out all the stops to create an effect, he knows just how much to do to make it work. And that’s the sort of wisdom and experience of a lifetime of composing. I think now we’re seeing a master finishing off masterpieces. 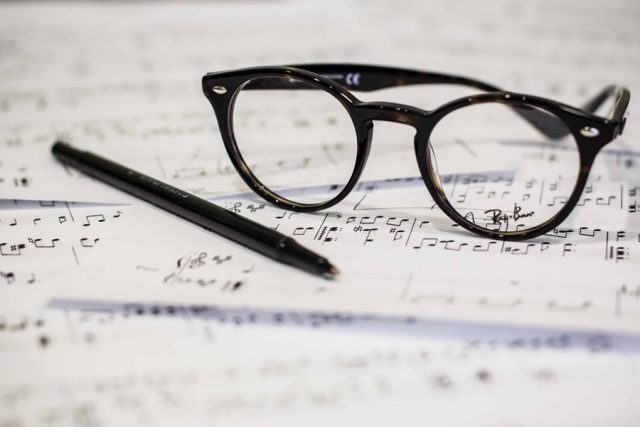 Audio: A Closer Look at the 2020 Oscar Nominations for Best Score

February 3, 2020WDAV BlogNews & Features, UncategorizedNeil Lerner, OscarsComments Off on Audio: A Closer Look at the 2020 Oscar Nominations for Best Score

The 92nd Academy Awards ceremony airs February 9, 2020. Music professor and film music scholar Neil Lerner shares his thoughts about the nominated scores, which include the first woman to compete in the category, Hildur Guðnadóttir, and family members Thomas and Randy Newman, each chosen for their work in separate films. Tune in at 8 p.m. Monday through Friday to hear him speak about the nominees or listen to his thoughts below:

Neil Lerner on the score for Little Women by Alexandre Desplat:

Neil Lerner on Thomas Newman’s music for the war drama 1917:

Neil Lerner on John Williams’ score for Star Wars – The Rise of Skywalker: