POSTED ON BEHALF OF MARC OVERTON, CO-HOST OF SPOLETO TODAY
Making eleven radio programs in 17 days with a group of strangers is like getting married without ever having met your spouse-to-be — except that there are four or five of them, and you have to figure things out pretty fast!
For 14 years, I created, produced and performed Spoleto Today by myself (for the most part). The show started in my kitchen in May 1995. I used the inexpensive (cheap) wireless telephone I had purchased from the big box discount store. I sounded like I was at the bottom of a deep and very damp well, but folks didn’t seem to care. They were just happy to have help making sense of the huge number of things to see and do in Spoleto Festival USA and Piccolo Spoleto. I was in Charleston, and the folks I knew were in Columbia; but, it was fun, and it answered a need.

END_OF_DOCUMENT_TOKEN_TO_BE_REPLACED

POSTED ON BEHALF OF MARC OVERTON, HOST OF SPOLETO TODAY & FORMER DIRECTOR OF SPOLETO FESTIVAL USA
Our work at Spoleto has fallen into a rhythm of long days that usually end only a little before midnight, but today was different in a wonderful way. I decided just to take a break in the outside world, run some errands and get back to the studio by 9:30 or so to rejoin my colleagues. 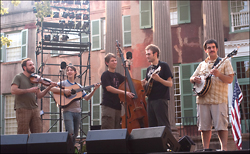 Spoleto magic took over: the sounds of Chris Thiele and the Punch Brothers were making the trees in the College of Charleston’s Cistern literally sway. The audience was spellbound, there was a crescent moon peeping through the trees, and dozens of non-ticketholders were lined up along the wrought iron fence, getting some musical kicks for free. That queue included several members of the Spoleto Festival Orchestra, on their way home (fiddle cases slung over their shoulders) who were enjoying a slightly different “Song of the Earth” than the one by Mahler they had just played at Gaillard.
It was all quintessential Spoleto: Mahler a few blocks away — transcendent, majestic — and Chris Thiele’s unique blend of bluegrass and traditional American folk in the Cistern, with PIccolo Spoleto theatre performances across the street. The whole panoply of theatre, music, and the balmy Charleston night: everything that makes Spoleto the unique experience of place and performance it is. 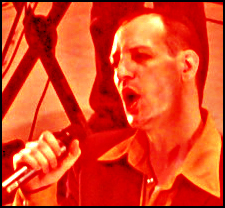 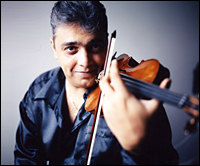 Check out this quick video of Friday’s opening ceremonies at Spoleto Festival USA, courtesy of Katie Rather Moore, College of Charleston.

Spoleto Today! from WDAVfm on Vimeo.

Tradition vs. Newness at Spoleto

POSTED ON BEHALF OF MARC OVERTON, FROM SPOLETO FESTIVAL USA IN CHARLESTON
Hearing the bells of St. Michael’s this morning just after 10:00 made me think again about the striking juxtaposition of tradition and newness that each year’s Spoleto Festival brings. I’ve spent a lot of Sunday mornings in a lot of small American towns over the years as I toured the country on one or another of my motorcycles, but there are few places left where the sound of Sunday morning church bells are so much a part of the weekly rhythm of living. As they rang, I thought that later that day, Spoleto performances by Japanese dancer Hiroaki Umeda, and the raunchy, graphic, ritualized violence of DON JOHN would shake up Charleston’s genteel sensibilities and jazz up its rhythm. And that’s good. Spoleto always brings some jolts that make the old ways stand out in relief, and we all need to be reminded that old things have value for good reasons.