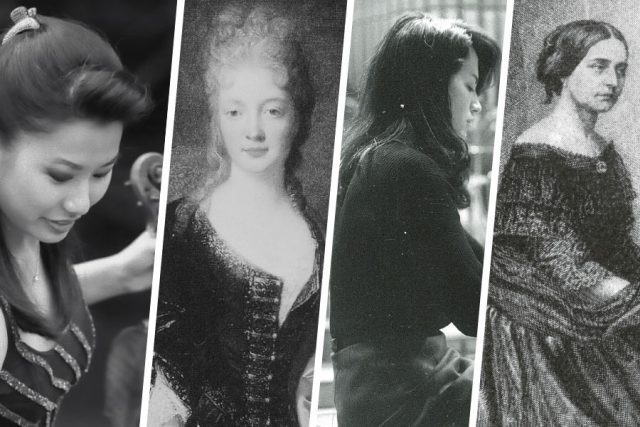 22 Under 22: Achievements in Classical Music for Women’s History Month 2022

As part of WDAV’s 2022 Women’s History Month celebrations, we’re highlighting 22 young women in classical music and their incredible achievements before the age of 22. Featuring instrumentalists, opera singers, conductors, composers, and beyond, this list represents just a fraction of the crucial contributions women and girls have made to classical music since its earliest stages of development. Happy Women’s History Month!

At just 12 years old, violinist Jennifer Pike became the youngest-ever winner of the BBC Young Musician of the Year, followed by debuts at the BBC Proms and Wigmore Hall at 15. The following year, Pike was awarded a scholarship to study at the Guildhall School of Music and Drama on a specially-created postgraduate course, never before undertaken by someone of her age. She graduated with First Class Honors in Music from Lady Margaret Hall, Oxford in 2012, where she is now the Artist-In-Residence.

Before turning 22, pianist Isata Kanneh-Mason had won The Royal Academy Iris Dyer Piano Prize four times and received the 2016 Mrs. Claude Beddington Prize for outstanding recital results at the Royal Academy of Music, among numerous other awards. Last year, she became the 2021 Best Classical Artist recipient at the Global Awards along with her siblings.

Cellist Laura van der Heijden won the BBC Young Musician competition at just 15 years old. Since graduating from Cambridge University in 2019, she has performed with the BBC National Orchestra of Wales, the Tchaikovsky Symphony, the Prague Symphony, the London Philharmonic and BBC Philharmonic Orchestras, and the Los Angeles Philharmonic.

Grace Moore has already begun to make a name for herself as a composer at just 14 years old. The New York Symphony-Philharmonic performed her piece “Summer” in 2020.

Clara Schumann, who would go on to become an esteemed composer and one of Europe’s leading piano virtuosi, was a child prodigy who gave her solo debut in the Leipzig Gewandhaus at the age of 11.

Violinist Sarah Chang first played as a soloist with the New York Philharmonic and the Philadelphia Orchestra in 1989, when she was 9 years old. At 19, Chang became one the first women and the youngest recipient ever of the Avery Fisher Prize.

After making history as the first saxophonist to win the BBC Young Musician Woodwind Final, Jess Gilham made her BBC Proms debut at 18 in 2017. Gilham has now released a pair of albums: “RISE” (2019) and “TIME” (2020).

Born in 2005, Alma Deutscher composed her first piano sonata at 6 years old, then completed a concerto for violin and orchestra at 9. These were followed by a piano concerto and a full length opera, Cinderella. Commissioned by the Salzburg State Theatre, her second opera will premiere next year.

Florence Price, the first Black woman to gain recognition on a national level as a composer, grew up as a piano prodigy, playing in her first piano recital at age 4 and having her first composition published at 11.

Composer Francesca Caccini made her debut as a singer at King Henry IV and Maria de Medici’s wedding at age 13. Her first opera, La Stiava, premiered at the Florentine Carnival when she was 20 years old.

Known as the first British woman to compose a symphony, Alice Mary Smith’s first song was published when she was just 18. She completed her symphony at age 24 in 1863.

Maria Ewing made her professional debut as an opera singer at the age of 20. Three years later, she received high praise for her Ravinia Festival debut from a Chicago Tribune reviewer: “I cannot remember a young singer who has excited me more on a first hearing… Still in her early twenties, she has the clear stamp of greatness in every movement and tone.”

In 1986, violist Rebecca Young became the youngest member of the New York Philharmonic at 20 years old. She received an offer to join when she was still attending Juilliard as an undergraduate student.

As a teenager, classical guitarist Alexandra Whittingham was already a rising star in the music scene, winning the inaugural Edinburgh Guitar Competition at just 16. At 22, she was awarded first class honors at the Royal Academy of Music and the 2019 Timothy Gilson Guitar Prize.

In 2006, Carol Jantsch became the youngest member of the Philadelphia Orchestra at 21 years old. In the same year, she became the first woman to hold a principal tuba chair in one of the nation’s top orchestras.

Maddalena Casulana published her first collection of madrigals, “Il Desiderio,” at the age of 22. She was an Italian composer and the first female composer to have an entire book of her work printed in Western musical history.