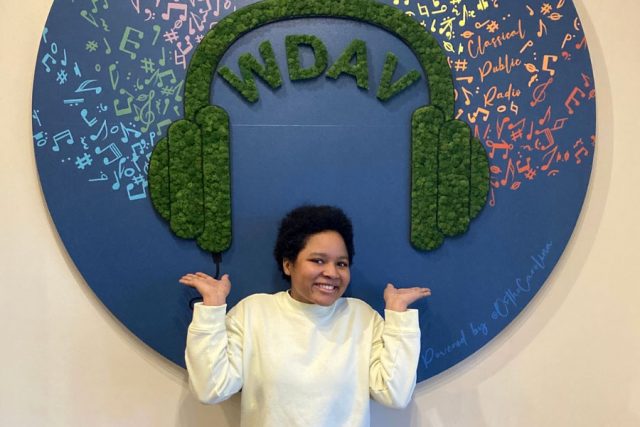 Earlier this year, Christen Crumpler, host and producer of WDAV’s Power Play podcast, made the leap onto the airwaves as the host of Sunday Night Music. Last month, Christen traded in her night owl wings for a move to Sunday afternoons at 4 p.m.

A native of Charlotte, Christen studied violin and piano at Northwest School of the Arts and continued her studies in college, where she earned a Bachelor of Arts in Music. In addition to her hosting and producing duties at WDAV, Christen is an aspiring songwriter. Now that she has settled into her new time slot, it’s time for a little Q&A to help listeners get to know her better.

What has been the most challenging aspect of learning to host a radio show?

Figuring out what I want to say and how to shape it for a particular medium. College writing is very different from writing for a format like radio. So, keeping those things in mind, and still making sure that I’m able to translate my authentic self well.

Have there been any surprises along the way?

I think finding out that I have a knack for radio hosting/voice work! When I began as an intern, my mindset was initially focused on the audio editing portion of production – since I was confident in doing that. I’m continuing to learn that my capabilities are much wider than I’ve allowed myself to previously think.

Give us the name of a composer who we should all give more attention to.

Please delve into the musical world of Joe Hisaishi! He’s a Japanese composer who’s responsible for a large portion of the film scores to Hayao Miyazaki’s animations. Musically, Hisaishi’s able to enhance and bring to life the worlds Miyazki creates. And Joe Hisaishi’s music (within those films) was a key inspiration of mine when it came to orchestral music growing up.

What should listeners expect to hear when they tune in?

You can expect every now and then, in my shift, a look into how I experience music. Also offering space for you to think about how you interact with music too! A person’s musical experience can be enhanced by connecting with others – and so I try to do that as much as I can when I’m on the air.

When you’re not busy announcing for WDAV or working on producing the next episode of Power Play, what interests do you pursue?

Well, these days, you can catch me playing video games on my Nintendo Switch! I’m no pro, but I do have my fair share of achievements and hours across different games and consoles. Also, I’m always working on writing songs and creating instrumentals for my own music that I want to release at some point.

What advice would you give to others who – like you – are new to hosting in the Classical Music/Radio space?

Be kind to yourself. There’s not a lot of us noobs out here at the moment – and so, at times, it can feel like you’re not hitting the marks you think you should be meeting. It’s a growing journey. You’ll be able to reach the goals you’re wanting if you keep at it – like the hosts that have 20/30+ years in this space eventually did. Make sure you’re eager to learn and curious about how you can approach things differently.

You can catch Christen hosting on WDAV every Sunday between 4 p.m. – 6 p.m. Listen closely – she might even mention her gamer tag. The latest episode of the Power Play, Spirituals: The Power of Community and Music, is out now and available at all major podcast platforms including Apple, Google, and Spotify.