Listening to classical music is like experiencing an extended travelogue, of sorts. The music on the radio takes you on a musical journey where at any given moment you could be in Vienna, London, Rome, Prague or St. Petersburg.

And that’s just Europe. South America offers a rich and bountiful musical history. Besides all the other lands I have mentioned that I wish I could actually visit, music allows us to imagine ourselves in, say, Argentina.

The Steinway & Sons record label has recently released “Panorama Argentina,” volume two in a series of albums featuring piano music from Argentina. Mirian Conti is a New York-based, Argentinian pianist who deftly captures the flavor of Argentina from a variety of 20th century composers such as Remo Pignoni, Enrique Albano, Carlos Guastavino, Julian Aguirre and others. These works are rooted in traditional dance and folk melodies that transport you to the musical heart of the Argentinian soul.

So, if you’ve been dreaming of a trip to Argentina, this new album is a wonderful step in that direction.

Ted Weiner is a WDAV veteran. He has been on the WDAV airwaves since November 1986 when he arrived in Charlotte from the Big Apple and began working as a weekend and all-round fill-in announcer. He became Music Director in 1991 and has been maintaining the WDAV recording library and choosing the music we hear ever since. Late owls and early birds can hear Ted Weiner on WDAV from midnight until 6 each morning on WDAV’s Early Shift on 89.9fm or online.

On this Sunday’s edition of New Classics on WDAV, a new CD of music for piano and orchestra by Benjamin Britten is sampled. Britten wrote relatively few works that spotlight the piano. He once remarked that he regarded the piano basically as a “background instrument”. In this interview, Leonard Bernstein gives a brief take on the complexities of Benjamin Britten. 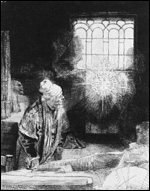 In anticipation of WDAV”s live broadcast of Opera Carolina”s Faust (by Gounod) on Saturday, I was asked by another staff for examples of other music inspired by the Faust legend. So how about these:
Berlioz: Damnation of Faust
Spohr: Faust
Liszt: A Faust Symphony
Wagner: A Faust Overture
Schumann: “Faust” Concert Overture and oratorio

Ginastera: Overture to the Creole Faust
That”s what I can think of. What about you? Can you add to this list?