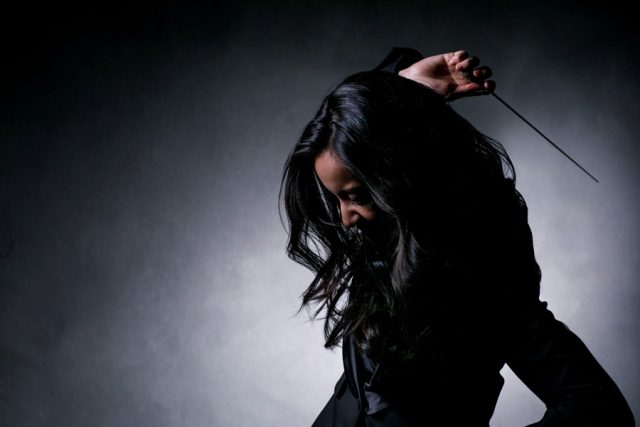 Oscar-winning actor Walter Huston said, “I ain’t paid to make good lines sound good. I’m paid to make bad lines sound good.” That might be the true test of a conductor: Taking a 35-minute chunk of elevated salon music such as Beethoven’s Triple Concerto – not bad, but nowhere near a masterpiece – and making it seem more intriguing, even beautiful, than it actually is.

Erina Yashima did exactly that with the Charlotte Symphony Orchestra Friday night at Belk Theater, abetted by a well-matched trio of soloists who were sensitive to the score and one another. Then she led us through a great piece of music, Berlioz’ “Symphonie Fantastique,” with passion and sound judgment.

She had already asked the CSO to play above their collective heads in the curtain-raiser, the fastest rendition of the overture to “Ruslan and Lyudmila” I’ve ever heard. Now she asked them to sustain the same kind of energy not for five minutes but for 50, and they responded. I have no idea whether she’s applying for the music director’s job here, but she shot into my top three candidates by the end of the concert.

Yashima literally bounded onto the podium and turned a megawatt smile first on us, then on the orchestra; if that smile ever dimmed, I couldn’t tell. She hurled them into Glinka’s whimsical-lyrical overture, getting the kind of rapid-fire precision – especially from the strings – I hear only when the musicians play at their best. (If you recognized the piece, perhaps you know it as the theme to the American TV sitcom “Mom” or the video game “Tetris Classic.”)

Fears that we might be racing through the night ended as soon as she carried us gently into the Beethoven. It’s probably worth noting – I wish it were not – that all three soloists were also female. The piece can turn into a more-or-less piano concerto with strings somewhere in the background, if the keyboard soloist pays no heed to the others. But Anne-Marie McDermott, who has given some bravura performances at Spoleto Festival USA over the years, stayed perfectly attuned to violinist Tai Murray and cellist Julie Albers. At one moment in the finale, they stopped time with a series of hushed notes that pulled you into the piece irresistibly.

Yashima’s version of Berlioz contained one interesting choice after another, many of them subtle. The scene at the ball hinted at mental distress without descending into a swirl of madness. The march to the scaffold had a deliberate dignity, as if the man dreaming about dying went proudly rather than despairingly to his end. The witches’ sabbath, which exploited all the resources of the augmented orchestra, was consistently spooky but also tremendously exhilarating; we soared into the sky on our broomsticks and had a hell of a good time.

On paper, this concert looked like the narrowest range of music this season: three works, all composed within 38 years (1804-42), all by Central and Eastern Europeans from the first half of the Romantic Era. But the soloists and especially Yashima revealed so many colors that we ended up traveling across a whole universe of moods and ideas.