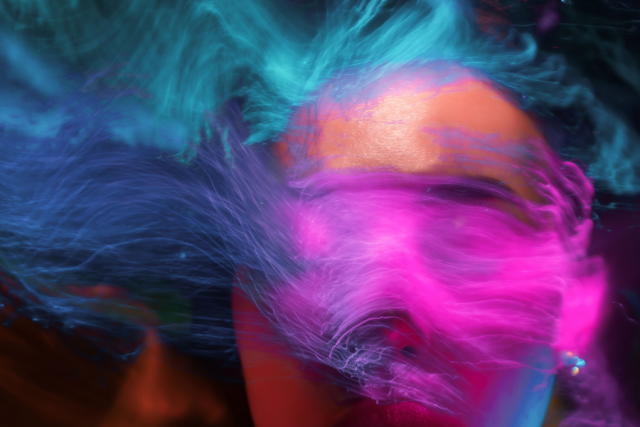 What wakes you up in a cold sweat? For radio hosts and performing artists, a piece of faulty equipment or a missed cue is all it takes to send a normal dream into a tailspin. This Halloween, WDAV staff members share the terrifying radio and performance dreams that have haunted their midnights (plus a few real-life nightmares).

“Years ago, I was in a college production of Rodgers & Hammerstein’s Oklahoma! Though I have a lot of good memories from the show, I was a bucket of nerves for most of the run – we staged it at a local opera house, and I was absolutely terrified to sing in front of such a large crowd. My entire family, several of my professors, dozens of my classmates, and even a high school teacher of mine ended up coming to see it, which added to the overall sense of dread. To this day, I have a recurring nightmare every few months, and it always plays out the same way: my college voice professor calls me in a panic and says, ‘We’re doing Oklahoma! again, tonight, and the whole cast is waiting for you to drive down so rehearsals can start.’ It sounds silly, but I wake up in a cold sweat every time!”

“Any person coming into a new job in a new field will most likely be nervous about messing something up. I came to WDAV in late 1986 from a theatre background, never before having worked in radio, even though I had dreamt of a radio career since I was a teenager. So, I was lucky enough to be hired at WDAV as a paid part-time community announcer, mainly on the weekends or late at night. Back then, WDAV signed off at 1 a.m. every night and signed on at 6 a.m. After my first couple of weeks, I felt I had the hang of things. I was sleeping well at night. One morning, I thought I had overslept, so I hurriedly put on my clothes, hopped in my car and zipped up I-77. I feared I was really running it close to the scheduled 6 a.m. sign-on time, and I began to get nervous as I had to get to the station, flip the switches that turned on the transmitter, pull the pre-scheduled LPs for that morning’s shift, cue up the needles on the turntables and be ready to speak in a calm and clear voice right at 6 a.m. Could I pull it off? I was confident that I could.

Well, I got inside the building at 5:55 a.m. and I opened the door to the on-air studio and all I saw were loads of wires and cables hanging from the ceiling with no equipment there to do my radio stuff. It was like a bomb went off in there. It was a horror scene as I went into a sheer panic and ran around the building screaming like a banshee not knowing what to do. I was hyperventilating and crying as I knew I was going to get fired even though I knew I did nothing wrong. Suddenly, I woke up breathing heavily not knowing where I was. I looked around the darkened room and in a few breathless seconds I realized I had just experienced a nightmare!”

“Back in early 2020, before COVID hit, The Davidson College Choral Arts Society was performing a Britten concert, and I had a solo part in one of the pieces, Rejoice in the Lamb. I was so nervous about this performance as it’d been a while since I was on stage that I began to have nightmares about it. The night before the concert, I had a terrible yet hilarious one where I completely forgot what piece I was supposed to be singing and just stared at the audience in front of me. Out of fear of the silence, I just began singing Sure on this Shining Night. Everybody was staring—the organist, the choir, audience, conductor, everybody. No one knew what was going on. I finished the piece to a smattering of confused applause and the conductor just gave me a look that said ‘Ooook, well, thanks for that?’”

“It’s common for actors to have nightmares involving being in the wrong play, where the lines you learned and the costume you’re wearing make no sense in the play you happen to be in. I certainly had my share of those when I studied for and pursued a career in live theater as an actor and director. When I made the transition to radio, I began to have a similar nightmare in a new setting. I’d be in a radio studio, but it would be completely unfamiliar to me, so I wouldn’t know how to operate the turntable or start the mic or any basic things (which is kind of a silly dream, considering how similar the equipment is in most studios). Another variation on that nightmare was one in which the recording I was playing would end without me having time to find or ‘cue up’ the next musical selection. What would ensue was the dreaded ‘dead air,’ which is anathema in radio, and it would last interminably in the nightmare while I searched frantically for the next music on the playlist.

I also experienced a real life nightmare in radio many years ago, when we first experimented with using the Internet to transmit the signal of a live broadcast from the venue to the station, and from there to listeners using our broadcast signal. I was very nervous about this and argued that we should still rent a phone line as a backup in case anything went wrong with the then notoriously unstable Internet connection. But the phone line was expensive, so the GM at the time shot down that idea. The day of the broadcast came, and the program, which was a Christmas holiday concert from a church in Charlotte’s Center City, was underway when suddenly we became aware that the signal was breaking up on its way to the station, and on air, of course. We scrambled to work around the faulty connection, but it continued to be unreliable, so we had to abandon the live broadcast. Instead, we played the recording of the concert we were making simultaneously later that afternoon. We were all embarrassed, not least the GM who had insisted we use only the Internet. And we were alternately annoyed and amused when we learned that the cause of the disruption was that someone in the church office had been using up the available bandwidth of the Internet connection during the concert by streaming an episode of The Daily Show on their computer!”