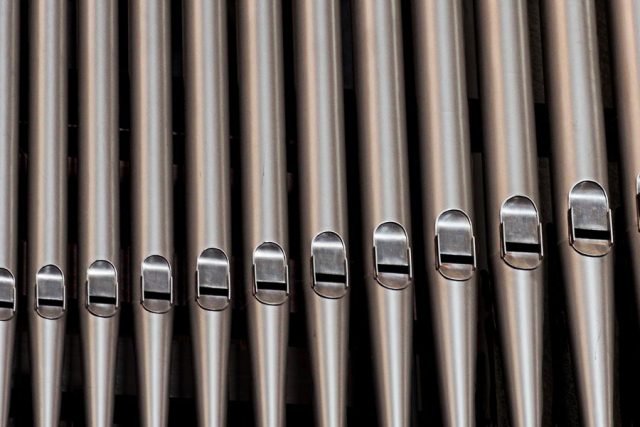 Music won’t heat your home, freeze your food or keep your Internet flowing. But if you were one of the thousands of people in Mecklenburg County who lost power during Tropical Storm Ian – I speak from experience – you might have found solace in the Charlotte Symphony Orchestra(CSO)’s concerts last weekend at First United Methodist Church.

The program started with restrained merriment in Handel’s organ concerto “The Cuckoo and the Nightingale,” passed through the high drama of Mendelssohn’s “Reformation” Symphony (his fifth), and ended with an eruption of joy in Saint-Saens’ “Organ” Symphony (his third).

Why put these concerts, co-sponsored by the Charlotte Chapter of the American Guild of Organists, in this church? Three reasons.

First, the beautiful array of organ pipes at Belk Theater, a noble backdrop for CSO gigs, aren’t connected to anything. (That story’s too long to tell here.) Second, all three composers – four, if you count J.S. Bach for the encore Jacobs gave us – played the organ in churches: Handel briefly in Halle, Germany, as a paid Reformed organist; Mendelssohn as an accompanist to his own sacred works; Saint-Saens at La Madeleine, the official church of the French Empire.

Third, as John Apple of the AGO Charlotte Chapter pointed out, First Methodist has superb acoustics and in one way improves on Belk Theater: You can always hear brass and strings distinctly when they play together. I sat in the back row of the balcony and appreciated the extra clarity in every piece.

The program didn’t give Jacobs, the first solo organist to earn a Grammy, much chance to show off. (He won in 2011 for Messiaen’s “Livre Du Saint-Sacrement.”) He brought good humor and nimble fingerwork to Handel’s brief concerto, where he imitated the birds of the title, and both quiet spirituality and thunderous chords to Saint-Saens’ symphony, which has only a supporting part for organ. He really shone in his encore, an A minor fugue by Bach that required virtuosic technique and energy.

Warren-Green and the orchestra came off best in the “Reformation,” Mendelssohn’s most muscular and Beethoven-like symphony. (He wrote it in 1830, just three years after Beethoven died; it celebrates the 300th anniversary of the Augsburg Confession, a key document in the Protestant Reformation.) We went from the hammer blows of the brass in the opening movement to the tension of the allegro vivace, the mournfulness of the andante and the spiritual uplift of the finale, where Mendelssohn incorporates Martin Luther’s hymn “A Mighty Fortress is Our God.”

The CSO played Saint-Saens with equal zeal, but Warren-Green made a curious choice: He took the middle section extraordinarily slowly, aiming for deep serenity but stretching the melody to the outermost limits of what the music could bear – and, to my mind, well beyond them.

The long multi-part finale sprang back into shape at once, capped by the three titanic organ chords that lead into the delightful rippling melody used so effectively in the movie “Babe.” If there can be such a thing as a chill of joy running up the spine, this music inspires it.