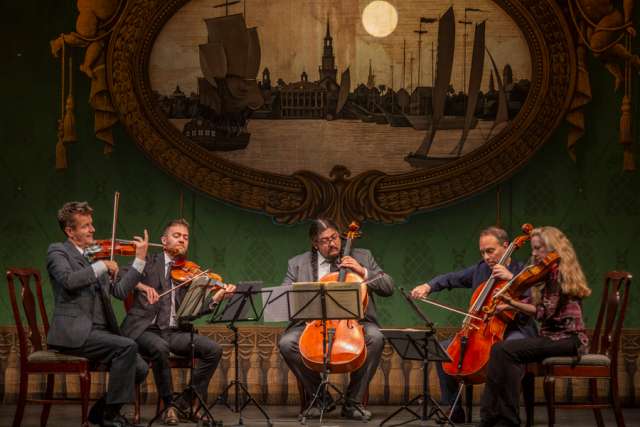 Ever-restless Geoff Nuttall, wearing a brown suit and a sheepish grin, paced the Dock Street Theatre stage before concert No. 4. “I like getting emails from you,” the host of the Bank of America Chamber Music Series told the audience. “A lot of them start out in a nice way: ‘I really enjoy your chamber music programs.’ Then there’s the ‘but.’ They go on, ‘But…I really don’t like contemporary music as much as you do.’

“Well, those of you who don’t like contemporary music will be happy to hear we’re not playing Andy Akiho’s ‘The War Below,’ because Alexi Kenney got COVID, and the piece was too complicated to get another violinist on short notice.” One audience member applauded lustily. “Don’t be mean!” Nuttall said with a laugh. “The good news is, Pedja Musijevic will play C.P.E. Bach’s Sonata in C Minor instead.”

And there, in 30 seconds, you had the perennial attraction of Spoleto Festival USA’s chamber music concerts: humor, a chatty connection between musicians and listeners, spontaneity at every level and the ability to supply an internationally respected artist on short notice. Musijevic played the piano without a score, so he had the Bach in his fingertips, but he did so with only a day’s warning.

I hadn’t gone to Spoleto on a weekday for many years, and the availability of seats at both the 11 a.m. and 1 p.m. concerts surprised me. They’ve traditionally been full on weekends, but the lesser number of midweek tourists and lingering anxiety about COVID during a spike in Charleston thinned the crowd. (The festival continues through June 12.)

I wouldn’t attribute lower sales to Nuttall’s fresh and ingeniously balanced scheduling. The second program I saw exemplified his deft sonic juggling. It began with a slightly reorchestrated Brandenburg Concerto No. 4, where clarinetist Todd Palmer sailed through the prominent solos usually given to a high-pitched trumpet.

Next came two living composers. Gabriella Smith’s string-woodwind quintet “Children of the Fire” set up a quiet groove, tore it apart to the point of chaos, then set off on a dreamlike, harmonious arc. Tabea Debus turned her recorder into an anxious, fluttering bird through the intense solo “Two and a Half Minutes to Midnight” by Dani Howard.

Then Debus dropped back five centuries to skip nimbly through anonymous Renaissance variations on the tune “La Monica,” subtly abetted by theorbo player Adam Cockerham. Schumann’s Piano Quartet, anchored by gray-maned Stephen Prutsman at the keyboard, ended the program with an ecstatic performance by him and string players from the next generation.

As always, Nuttall prepared the ground for maximum enjoyment. He pointed out that Schumann required the cello to play a low C; cellist Paul Wiancko would suddenly have to re-tune to reach this note for a few moments, then quickly return to conventional tuning to play the rest of his part. Watching Wiancko fiddle frantically with the fine-tuners near the base of the cello added to the pleasure of his warm-hearted playing.

I doubt you could attend two Spoleto chamber concerts without making at least one joyful discovery. I made two.

First, I learned that a sopranino recorder – the tiniest version of that instrument, hardly larger than the fat pencils you give schoolkids learning to write – can sound like something other than steam escaping from an unattended kettle. Tabea Debus played one in the Vivaldi Recorder Concerto in C (RV 443), and the sounds ranged from a pennywhistle-like exuberance to a gentle breeze of melody.

They and Debus both reside and work in England. We’re lucky that Nuttall keeps finding new faces like these, and Spoleto Festival USA keeps footing the bills to bring them to us.
__