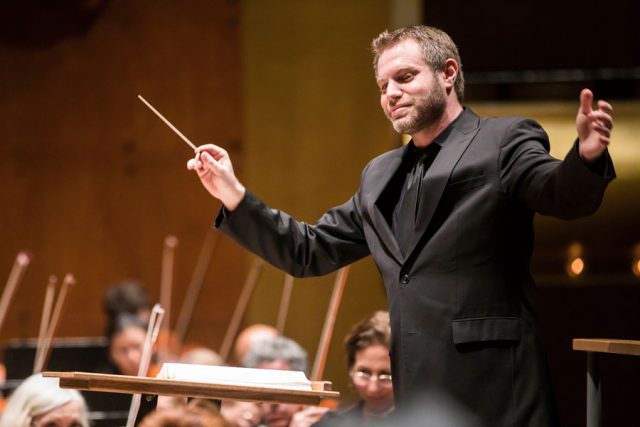 The Charlotte Symphony Orchestra hasn’t specified which of the guest conductors this season and next will be considered for the music directorship in 2023-24. Joshua Gersen took the podium this weekend as a late replacement for Kwame Ryan, who’ll appear next season, so I have no idea whether Gersen even wants the job. But on the evidence of Friday’s concert at Knight Theater, he belongs in the front rank of contenders.

Gersen and violinist Jinjoo Cho teamed for an introspective, insightful and finally incendiary reading of Samuel Barber’s Violin Concerto. Gersen also led the CSO through an unfamiliar piece, Errollyn Wallen’s “Mighty River,” and one where long familiarity can lead to boredom in an indifferent performance: Robert Schumann’s Third Symphony, the “Rhenish.” He guided us wisely through the former and blew the dust off the latter with a buoyant reading.

Gersen, who recently concluded a gig as assistant conductor of the New York Philharmonic, introduced the evening by suggesting we think of the pieces as linked by songfulness. “River,” a 2007 piece commemorating the 200th anniversary of the abolition of slavery in Britain, uses the British hymn “Amazing Grace” as the groundwork for variations. Barber and Schumann each wrote a tremendous amount of vocal music and made some of their orchestral pieces songful, too.

He might also have said the three were connected by rivers. Wallen grew up and studied by the Thames in London and the Hudson in New York City. Barber studied and taught in Philadelphia, along the Delaware, then lived with fellow composer Gian Carlo Menotti off the Hudson above New York. Schumann finished his symphony in Dusseldorf, along the Rhine. All three of these works flow with unceasing energy, and Gersen had his fingers on the pulse of each.

Wallen’s curtain-raiser suggested Bedrich Smetana’s “Moldau” at times, not melodically but in the swirls and eddies of music that steadily built in intensity. She used snatches of the American spirituals “Deep River” and (if I heard right) “Going Home,” as the piece buzzed and thrust forward to a strong conclusion.

Gersen showed us at once how he thought the Schumann should go. The taut, bracing opening movement and breezy scherzo reminded me of George Szell’s landmark recording with the Cleveland Orchestra, my favorite. Gersen relaxed in the gracious third movement, gave us a warm but never ponderous fourth – it’s marked “feierlich,” or “solemnly” – and then swept us through the finale, wiping out memories of the watery horns that marred earlier sections.

Yet the Barber concerto remained the high point of the concert. Joy lit Gersen’s face as he gently suppressed the orchestra in Barber’s quieter solo passages and unleashed it for thunderous climaxes. He also beamed at Cho, who sometimes bounced in smiling approval when she wasn’t playing.

Cho took her earliest solos with a small, sweet, silvery sound, ruminative but unsentimental. Her passion mounted as Barber’s did, and she produced the most captivatingly intense rendering of the beautiful slow movement I can recall. (“She’s a human singing violin,” said my wife, aptly.) The pyrotechnics of the fiddle-busting final movement lifted her, Gersen, the orchestra and the audience to the highest level of delighted delirium.