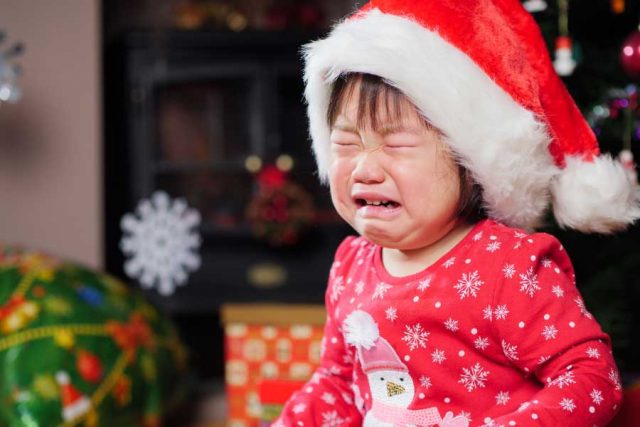 We can wish for the perfect holiday season all we want, but in the mix of family visits, packed schedules, and high expectations, it’s not uncommon for plans to go awry. When the most wonderful time of the year takes a not-so-wonderful turn, sometimes the only thing we can do is laugh (and share the story with our coworkers and listeners).

“I was getting married and preparing for my first Christmas with my new in-laws, and I wanted to make a great first impression. My fiancé and I had had a professional photographer shoot engagement photos for us, so I thought pictures would make a great gift for his parents. The problem was that I didn’t have a box that was the right size, and I wanted their present to be gorgeous. As the day for the Christmas gathering approached, I had some frozen shrimp delivered – and lo and behold, the box the shrimp came in was the perfect size! It did smell a little bit, but I thought I could eradicate the odor of the shrimp by dousing the box with spices like cinnamon and nutmeg. The package was beautiful, but the second my mother-in-law took off the first piece of tape, the smell of shrimp invaded the living room! I’ve never been more embarrassed in my life at delivering a gift that was truly a fish out of water!”

Will Keible
Director of Marketing and Corporate Support

“Trouble. I had a knack for finding it when I was kid. And each year at Christmas I was reminded how much of it I had caused by the number of sticks that my parents… err… Santa left in my stocking. When I was 8 years old, and still squarely in the pro-Santa camp, I was greeted at the fireplace with an entire sapling stuck in my stocking. It was so big that it brushed up against the ceiling. I recognized it immediately as the tree that I had snapped in half while roughhousing with my friends that past Summer. My Dad had recently planted it and was more than a little angry to see it contorted into a right angle. I don’t know if he hatched the plan for the stocking then and there, but its appearance six months later is evidence that my Dad rarely missed an opportunity for a well-timed joke.”

“One moment that is forever seared into my memory is the night Santa Claus skipped our house. As kids, my brother and I were notorious for taking forever to fall asleep the night before Christmas, and I guess my parents had had enough of it this particular year. Just as my mom was begging us to go to sleep, my dad walked past our bedroom windows shaking a set of jingle bells, which we all heard loud and clear. Mom shrugged and explained that the sound of bells passing by meant that Santa knew we weren’t asleep yet, and ‘maybe if you go to bed right this second, he’ll come back!’ I won’t say I recommend it, but it worked like a charm, and we all crack up about it to this day.”

“When my brother was 10 and I was 13, we committed the Christmas crime we are still paying for all these decades later.

Our family did not have extra money to throw around when I was growing up, but somehow, Mama always made Christmas look like a cozy movie scene. She was so careful, thoughtful, and precise about how much money she spent on each of us and how all the toys and packages would look laid out in the living room next to the tree. Our stockings were stuffed to overflowing, and the toys Santa left for us were thoughtfully displayed without wrapping paper with the tree and the mantle as a backdrop, like a beautiful department store window with its moody colors and twinkling lights. It was her joy to get up with us on Christmas morning and watch us open our gifts.

At six o’clock that infamous Christmas morning, I sneaked into my brother’s room and announced quietly that Santa had come. We knew Mama hadn’t gotten a lot of sleep, so we resolved that we’d go open all of our presents quietly so as not to disturb her. When she woke up, we’d “tell” her what we got and how much we loved it.

Reader, I need you to know something: This was the worst idea I’ve ever had, and it isn’t even close. Mama alternated between crying and yelling for a week, and the Ghost of Christmas Past visits my brother and me every single year as we sit and endure the time-honored tradition of listening to our mother tell her version of the scandalous event. I live in hope that my own children will someday allow me the pleasure of haranguing them for decades, too.”