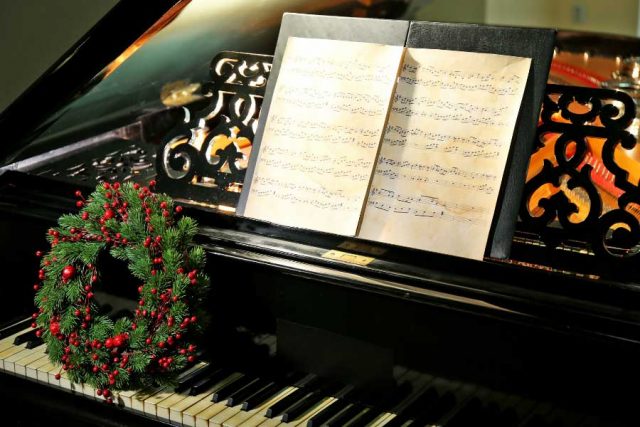 Though it’s natural to think of classical music icons as far removed from our lives, their holiday festivities had just as much joy – and just as many mishaps – as ours do today. This holiday season, let’s take a look at what some of history’s most cherished classical figures were up to at Christmastime.

While her parents and brothers rehearsed for a performance of Handel’s Messiah, superstar mezzo-soprano Grace Bumbry – then too young to join any of their church’s choirs – soaked in the music from the pews. Later, as they finished their chores one Saturday afternoon, Bumbry’s brothers made a shocking discovery:

“We were doing the washing, and Benjamin and Charlie were singing along in The Messiah, and I popped in with something that was missing. And they said, ‘Well, how do you know that?’ I heard it in the rehearsals. They were surprised to see that Grace knows all of the music.”

Though the director of the church’s junior choir deemed Bumbry too young to join the group, she was impressed with the little girl’s singing ability and arranged a solo performance for her at that year’s Christmas program. “I sang ‘O Holy Night,’ which I later found out was really quite difficult,” Bumbry explained in an interview with St. Louis Magazine earlier this year. “But in those days, you don’t have the sense to know that it’s hard… For me, it was normal. It was like playing with my yo-yo or something.” And the rest is history.

What do you get when Edvard Grieg, Johan Halvorsen, Christian Sinding, and Frederik Delius walk into a party on Christmas Eve? A truly unforgettable premiere. Before Delius’ “Sleigh Ride” was part of the standard holiday repertoire, it was reportedly conceived as a piano work, which was given its first performance as an after-dinner treat for the attendees of an 1887 Christmas celebration. In a letter to close friend Frants Beyer, Grieg describes the raucous scene:

“After the meal we were, without exception, all plastered, but the programme had to be adhered to and it offered music, music and still more music! What a Christmas Eve! … Mr. Delius played a piano piece which he calls ‘Norwegische Schlittenfahrt’ (Norwegian Sleigh Ride) with great talent.”

Long before she was Brazil’s first female conductor (and one of the most important figures in Brazilian music history), 11-year-old Chiquinha Gonzaga was a budding composer and accomplished pianist. She performed her first-ever composition, a song titled Canção dos Pastores (Song of the Shepherds), at an 1858 family Christmas Eve party with flute accompaniment from her uncle Antônio and verses contributed by her brother Juca. Though the score was never published during her lifetime, Gonzaga’s biographer Mariza Lira recovered it in 1939, and the music remains available for all to enjoy in print and online.

Despite composing many of Finland’s most popular Christmas songs, Jean Sibelius wasn’t exactly a fan of the holiday season (in fact, he once wrote to his secretary that “immediately after Christmas is over, things improve and life is fun once more.”) Nevertheless, the Sibelius family Christmas celebrations were filled to the brim with tradition. During visits from Sibelius’ daughters and their families, the house would reverberate with music and the din of childrens’ games, topped off with a delicious feast and an annual sleigh ride. The moment the children treasured most of all was the lighting of the Christmas tree, when their grandfather would lead them in singing his own Christmas carols around the sparkling display. Sibelius’ granddaughter Laura Enckell later recalled the tradition in her writings:

“(The tree) really had to dazzle you with its brightness. He played ‘High are the snowdrifts,’ and he played so loud, with the pedal down, as if he were playing the organ… We sang this song and then we sang ‘Give me no splendour, gold or pomp.’ This was all very jolly. It wasn’t pious or gloomy at all.”

Christmas in Finland with the Sibelius Family (This Is Finland)

Delius and His Music (Martin Lee-Browne and Paul Guinery, p.15)