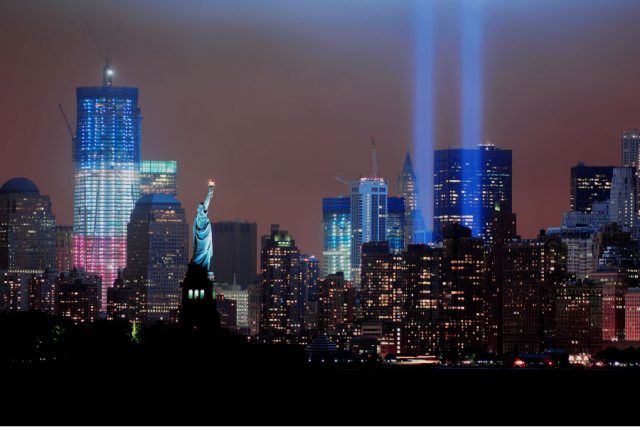 None of us who experienced September 11th, 2001 will ever forget it. The 20th anniversary of the event this year brings the memories back with special force. Many reflections on this milepost will mention how the world changed that day. For my part, I think of it also as an event that defined in many respects the future direction of WDAV.

On that unimaginable morning, I happened to be on the tarmac at Charlotte-Douglas airport on a flight waiting to take off for Baltimore. I was a newly minted program director traveling to attend my first public radio conference in that capacity. The plane never left, of course. An announcement informed us that all flights were cancelled, and we were directed to leave the plane.

I’m embarrassed to admit that I was annoyed as I entered the skywalk back toward the terminal. Why should all flights be canceled because of an accident? I don’t believe the announcement specified what had happened, but somehow that was the impression I had formed.

It was only as I walked through the terminal, and saw the images on the television screens around which crowds with nowhere to go had gathered, that the unthinkable reality sunk in. When it finally had, I found a pay phone (remember those?) and called the radio station, fired up with the initiative of my newfound status as PD.

At the time, we carried NPR newscasts during the morning and afternoon commuting hours, and my idea was that we should increase them to hourly while the information regarding the events continued to come in. Fortunately for me, our general manager at the time, Kim Hodgson, had something more to suggest.

“I think we have to give some thought to the music,” he told me. I braced myself, expecting Kim to say that we should discontinue our classical music format temporarily to join the continuous NPR news coverage. On the contrary, what Kim proposed was that we adjust the music programming to the circumstances. “People are going to need a break from this horrifying coverage,” he said to me. “We need to give them something calming. It’s not the time for Offenbach’s Can-Can.” I will always be indebted to him for that sage advice.

Over the next week, we strived to provide an oasis from the devastating images with a mix of sacred classical selections as well as introspective pieces. As the days went by and our leaders urged us all to go on with our lives, we gradually shifted back to our usual, upbeat sound. Eventually, even Offenbach returned. But we had been changed.

We put off on air fundraising that autumn as late as we possibly could. When we finally began, we didn’t know what to expect. Instead of resentment or indifference, though, listener/donors responded with exceptional generosity. It seemed every contributor had a comment about how the classical music on WDAV helped them get through the most awful national catastrophe most of us had ever experienced.

While nothing that nightmarish has happened since then, the world has given us all too many shocks in the intervening years, not the least of them the pandemic we’re still living through. And even when things are relatively calm, individual listeners are always experiencing personal calamities, along with the mundane highs and lows that are part of life.

9/11 taught us what an important role classical music plays in the lives of our audience, and the profound responsibility WDAV has in sharing this music with them. That is a lesson that, like the day itself, we will never forget.