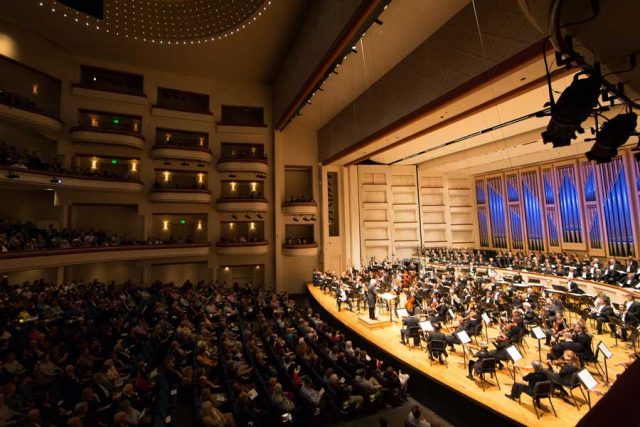 May 15, 2021WDAV BlogNews & FeaturesComments Off on The Charlotte Symphony Returns

Belk Theater was full Friday night for the public return of the Charlotte Symphony Orchestra.

Not full of listeners: We sat in masked pods of two and four, separated not only by multiple seats but multiple rows behind and before.

But full of delight at hearing an orchestra in person for the first time in 15 months, full of wonder upon rediscovering the power of live music.

Were there glitches? Of course. Lees took over when COVID-19 restrictions trapped music director Christopher Warren-Green in England. The musicians, who’d played just once for an audience – a small group of invitees — since winter 2020 sounded rusty once or twice. Even the drinking fountain in the lobby made a grinding growl when asked for water, like a sick grizzly roused from hibernation. (As I left, I saw it draped in funereal plastic.)

Yet the concert became a celebration and a renewal. Levine Cancer Institute president Derek Raghavan, a current CSO board member, introduced it by saying, “It’s been a tough year folks, and this is our coming-out party.” At the end, after Lees and Marsalis left the stage, the crowd gave the musicians spontaneous applause while they packed up their instruments. As patron Cristina Bolling noted afterward, we’ve all spent 15 months listening to headphones, mobile devices and stereos: Sound resonating around a hall, where we can’t pause the music to grab a sandwich, is new to us again.

Realities of modern concertgoing – perhaps permanent, perhaps not – became apparent immediately: No paper tickets, paper programs replaced by downloadable ones, no cash accepted by staff validating tickets for parking garages, no snacks or drinks in the lobby. Probably no one missed the food and drink during a 55-minute event with no intermission, but that could become an issue at a full-length show.

The symphony offered a much more interesting program than it has traditionally done in its Classical Series, though I’m happy to see that the 2021-22 season contains more unusual fare. (You’ll find a list of those concerts here.)

Concertmaster Calin Ovidiu Lupanu got brief chances to shine in Bela Bartok’s Romanian Folk Dances, inspired by music the composer absorbed in Lupanu’s native land. The tempos, slightly slower than is common, let Lupanu bring out the melodic elements and let us hear more details in one of Bartok’s most accessible compositions.

Marsalis then came on for Erwin Schulhoff’s “Hot-Sonate,” four movements tinged with jazz and blues elements for the soloist and orchestral sections that sound like a slightly discordant jazz band. The musicians seemed disconnected from Marsalis at first, but Lees righted them, and the third movement jelled beautifully: The orchestra tapped out staccato chords as Marsalis played a bluesy melody Duke Ellington might’ve written for Johnny Hodges in 1930.

George Gershwin’s “Lullaby,” an assignment from a music teacher, always seems flaccid to me in both its original string quartet version and his later orchestration. So I couldn’t tell whether the numbing, Mantovani-like wash of sound was his responsibility or Lees’.

But the pace picked up with Jacques Ibert’s Concertino da Camera. Like most of Ibert’s music, it’s insouciant and witty without making emotional demands on the audience. It does make musical demands on the players, though, especially in a long cadenza where Marsalis blew wild riffs – was he improvising? – that yielded moments of pure joy. If anyone in the audience still needed a reminder of why we ought to hear music live, there it was.